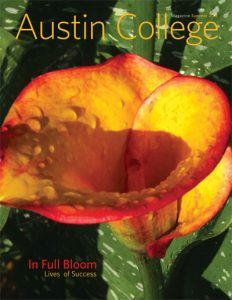 From the President
Many people ask me what it is like to be married to a magician. They expect that I will talk about secrets or card tricks. But the key thing is that marriage to a magician (at least to my magician), most essentially means living with a man keenly attuned to wonder, hope, holiness, and transformation.

Six Fulbrights: A Record of Success
Austin College is one of the top three Fulbright-producing institutions per capita in Texas. This spring, awards to six graduates propelled the College to a new level of success.

The Many Faces of Success
Members of the Class of 2011 are prepared for lives of success—success that means happiness, commitment to others, and involvement in a global neighborhood—in addition to career achievements.

Ghost Light
Alumni and students presented a weekend of musical theatre that brought to life the ghosts of 40 years of past Austin College performances—and a few of their own.

Time
Physics professor Larry Robinson has taught hundreds of physics classes. Now, he is ready for new adventures; he retired from Austin College this spring after 40 years in the classroom.

In Full Bloom: Lives of Success
Austin College alumni engage in successful lives around the globe. While they certainly can be found in prestigious careers, their own definitions of success are based more on the quality of life they enjoy than their levels of promotion or financial compensation.

The Light Shines for Texas
Austin College’s Light Cummins has been an expert on Texas history for years. A two-year stint as State Historian of Texas gave him opportunities to share his knowledge and the chance to hear of even more Texas stories.