At first glance, one can almost miss the resemblance between the two veteran members of the Austin College men’s cross country team. Turns out, it’s somewhat by design. Twins Chris and Johnny Biffar would look much more alike, identical in fact, if Chris didn’t have long hair and a beard. 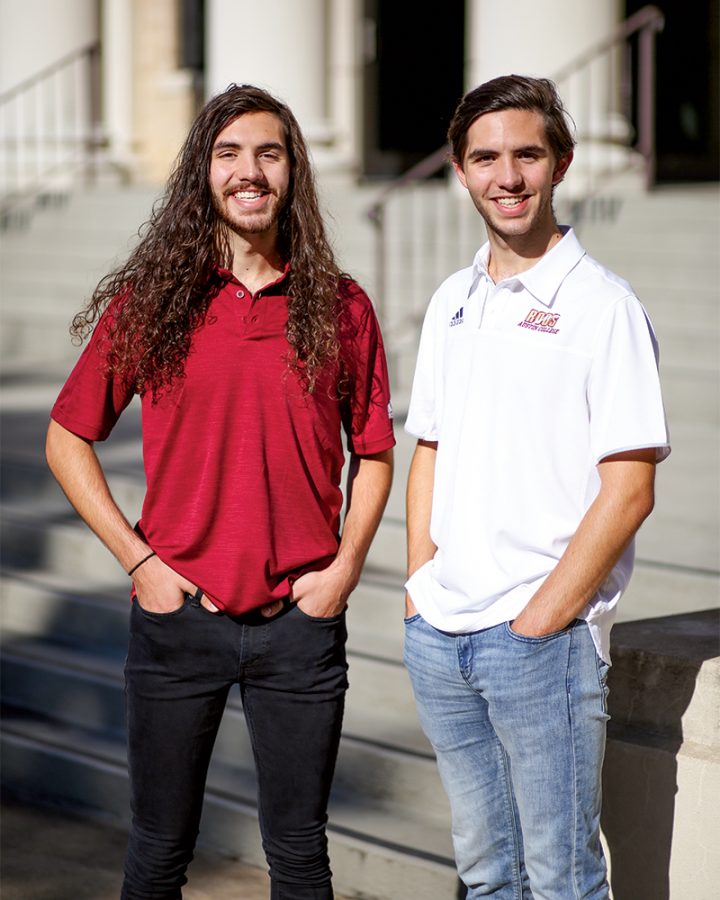 Sit with the two for a short conversation, though, and the brotherly connection isn’t long disguised as the inside jokes, verbal shorthand, and friendly one-upmanship reveal the obviously close bonds.

The “all-in” ’Roos and successful juniors initially had no interest in attending Austin College, visiting as high schoolers only to satisfy their aunt, Karen Glenn, Chemistry Lab Coordinator at the College. Once on campus, their perspectives changed quickly.

First, they learned about academics and the faculty mentor program. They liked what they heard. Then, runners since 7th grade, the two met with Bryan Garcia, Cross Country Coach. The coach told them he didn’t coach his team to Division III standards, as if those were somehow less than Division I. His benchmark, the coach said, is to make every athlete the very best he can be. Right away, Chris wanted to be a part of that.

Johnny, too, was sold. While college as a “package deal” wasn’t a given, the two were happy with that outcome. Though they described college as a huge culture change, they also felt that everyone at Austin College wanted them to succeed. Chris is completing a major in History and  still deciding what path he will take careerwise; Johnny is completing a major in Art, with plans to work as a Graphic Designer. Academic life is going well.

They hadn’t had as much to celebrate in their athletic efforts. The men’s cross country team, formed in 2014, had never had a win. Five runners made up the fall 2019 team. As fall practice began, it was obvious that more than one teammate had not done the summer training they should have. “It looked like the beginning of another bad year,” said Chris, who confessed he was one of those teammates. The brothers described an early practice that “really did not go well” from Coach Garcia’s perspective. “When the coach left, the guys got together and got real about what we wanted to do going forward—and we wanted to do better. We decided we didn’t want to be mediocre anymore,” Johnny said.

Coach Garcia remembers exactly the practice and the days following. “That was a turning point,” the coach remembered. “The guys began to hold themselves accountable, and that is what creates a winning culture.”

The coach has witnessed Johnny and Chris grow as leaders and as individuals. “Johnny is the most competitive guy I’ve ever met and it doesn’t matter what the competition is,” Garcia said. “He is also the most welcoming and inclusive guy. Chris is just the same. They are the backbone of our successful culture.” 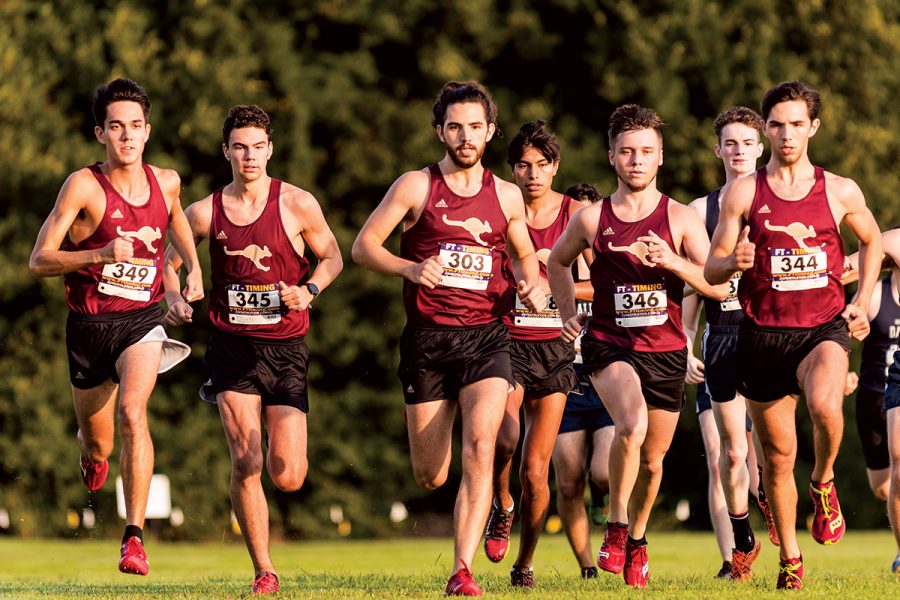 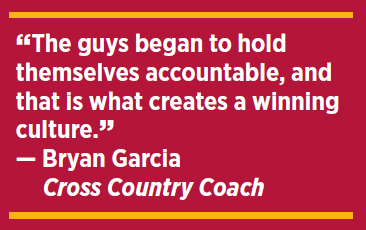 Johnny and Chris explained that a cross country course could be up to 8 kilometers, taking about 28 minutes, and that while running, they get into a zone, stay aware of the guys around them and stay with them for most of the run, and go through a sort of mental checklist. “Arms, good. Legs, good. Breathing, good.”

In fall 2019, they were pretty successful with that checklist, but they’d had past difficulties. In previous seasons, Johnny might randomly collapse, get up, run, and maybe fall three or four more times in a race. Chris, too, has blacked out while running. Both young men have epilepsy.

The disorder was diagnosed when each had his first seizure as sophomores in high school. Since they had been running for several seasons, they never considered stopping and mostly kept the disorder under control. After fall 2018, though, more answers were needed as Coach Garcia took their condition very seriously. He had already required Johnny to skip distance track season for two springs. Without better control of his condition, he might have had to skip fall 2019, too. 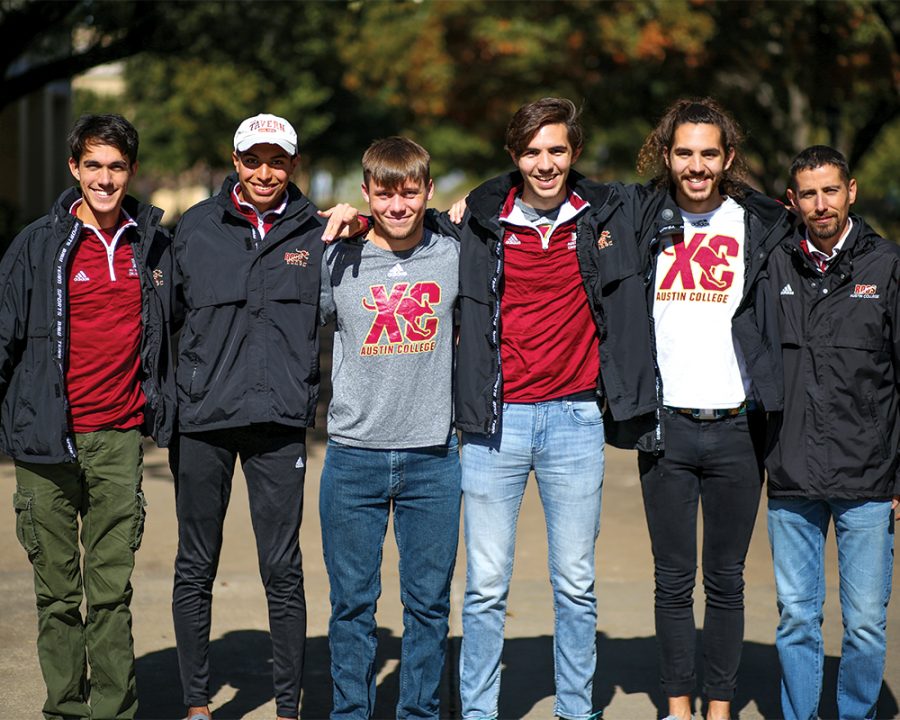 That would have meant missing the good stuff when the cross country team started to pick up wins; the 2019 season had brought four wins and one second-place finish prior to the SCAC Championship in November in Colorado Springs. “As a coach, my job is to see weaknesses and help the team improve; there were no weaknesses in Colorado,” Garcia said. “They ran outstanding races.” That success earned third place and a trip to the NCAA South/Southeast Regionals two weeks later. There, amidst their largest-ever field of nearly 240 runners and 35 teams, the ’Roos ran strong. Though they didn’t take any top spots, they won their coach’s pride and approval. “I couldn’t have asked for a better group of guys to represent Austin College,” Garcia said. 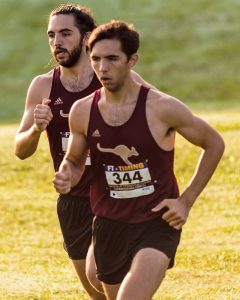 hris said the full season was good for mental growth and that the team now has the confidence to race to  win. “I feel like we’re all beginning to realize our potential,” he said. Johnny said reaching regionals for the first time in program history was obviously exciting, but in the future “making regionals is not a hope but an expectation.” With the 2019 experience behind his teammates, he  expects they will compete at a higher level. “The goal,” Johnny said, “is to score in the top 10 at regionals next year.”

That surely must have been some kind of meeting the teammates had to begin their season. Coach Garcia is proud of the dedication and work ethic that resulted. The Biffar twins and their teammates plan to just keep running.