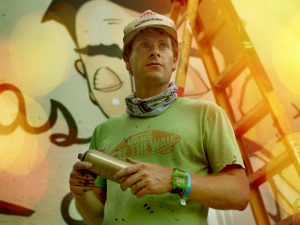 requently being the “new kid” due to the moves of his military family, young Michael Johnston ’02 found his own entertainment—and a lifelong passion—in art.

At Austin College, studying art was a no-brainer, Mike said, though he wasn’t sure how he would use it to make a living. Teaching art seemed an option so he  prepared through the Austin Teacher Program. He caught the “travel bug” during JanTerm courses that involved exploration in India and Australia; that planted the seed to one day live and teach overseas. 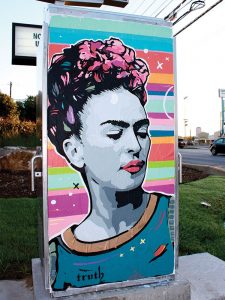 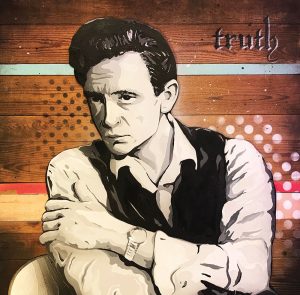 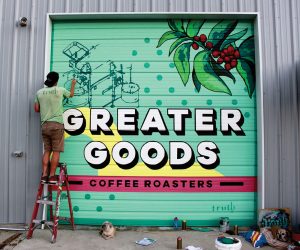 Mike began teaching art at a McKinney, Texas, middle school. After a few years, he and his wife, Erin, also a teacher, set out for what would be four years of teaching art in Shanghai and Kuwait. When they returned to make their home in Austin, Texas, Mike taught in Pflugerville while creating street art in Austin, putting up posters, painting murals, and doing commissioned work. After a few years, his growing art career led him to leave teaching, and he has continued the pursuit of his art full-time for the past four years. 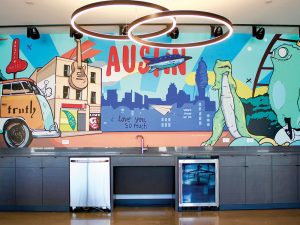 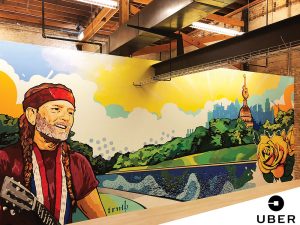 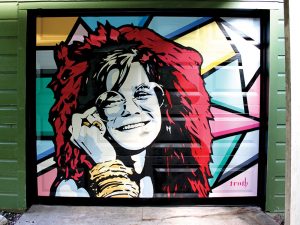 Texans, particularly Austinites, may well have seen his work. He painted a mural featured on the cover of Texas Monthly magazine in March 2016. He has also produced work for Google, Nike, the NFL, Paramount Pictures, Microsoft, and Toyota, among others. “I’ve had awesome opportunities,” Mike said. “God’s been good.”

At the same time, he was using vacant spaces along the streets of Austin as his canvas. That work can be very temporary—taken down or painted over at any time so he’s learned not to be too attached to it. He hopes it has impact while it lasts, however. His street art, under the name or tag “Truth,” is always positive or encouraging. “I want to uplift and brighten the day of those who see my work,” Mike said. “It’s the end goal.”

Mike still works with kids when he can—in Austin, across the country, and around the world. He and his wife take at least one international trip a year, often for work, often to teach kids.

“Art has always been my passion. Now, I make a living with it, and even in my free time, it’s something I want to do.”

Above: Several of the murals and street art creations by Truth
Discover more about Mike’s work.