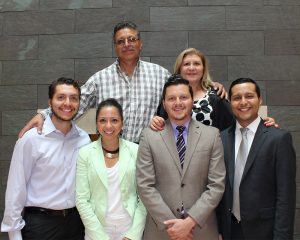 A Story of Success

A college graduation always calls for a celebration of goals attained. When Mario Ayala Jr. of Dallas received his Austin College diploma in May, what once seemed impossible became sweet reality.

Mario’s brother, Santiago, graduated from Austin College in 2006; brother, Nicolas, in 2008; and sister, Estela, in 2009. Four siblings graduating from Austin College is an impressive family achievement. The feat is especially remarkable considering their parents did not attend school beyond sixth grade and that, not too many years ago, none of those siblings spoke English. Though their mother loved learning, she was not allowed to continue her schooling; she promised herself that if she had children, she would encourage them to study. And she did.

In high school, Santiago told his college guidance counselor he wanted to become a doctor. In that case, she said, he needed to go to Austin College. He didn’t apply anywhere else. Nicolas followed his lead, applying only to Austin College; since it had been a good choice for his brother, that was enough for him. Nicolas liked the small community and competed in soccer.

Estela followed Santiago and Nicolas to Austin College. After all, she knew no one else who had gone to college. 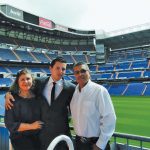 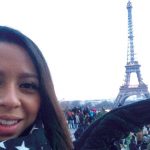 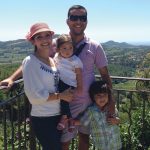 Mario, too, completed only one college application. “My brothers and sister had come here and though each chose different paths, the College met their needs; each traveled and did amazing things,” Mario said. “They did what our parents taught us: to work hard. And they were successful, so I headed to Austin College too.”

Jay Evans ’64 was the Austin College admission connection for each of the siblings—and the family said his role was definitely part of their story. Though he had officially retired as associate vice president of Institutional Enrollment by the time Mario Jr. enrolled, Jay guided him through the admission process just as he assisted Mario’s siblings. 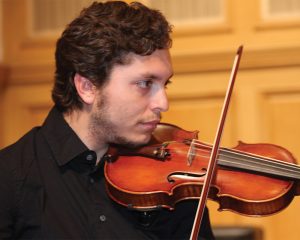 Sitting down with the four graduates and their father before Mario’s graduation was an opportunity to be treasured. The conversation included basic facts: who majored in what, various Austin College activities and involvements, career moves since graduation, and plans for the future. The time also included moments when words would not come, when tears flowed, when remembered struggles overwhelmed.

The story they told had its beginning many years ago in Mexico. Their father, Mario Sr., quit school after sixth grade and seeing no opportunities, ran away to work in California. Immigration sent him back to Mexico twice. Later, he made it to Chicago, where he learned English while working as a busboy for five years. He returned to Mexico in 1981 and married Esthela, a “beauty queen,” in his words. They obtained green cards and moved to Houston, where Mario Sr. worked and Esthela cared for their growing family. They moved back to Mexico while the children were small, and Mario Jr. was born there. A few years later, when they wanted to return to the U.S., Mario Sr. had appropriate papers, and the three older children were U.S. citizens. Esthela and 4-year-old Mario Jr. could not legally enter the U.S. and were smuggled across the border.

“I remember the day so clearly, going on ahead with just a few belongings, the smell of the room, the fear and uncertainty, not knowing when we would hear from our mother or where she and Mario were,” Estela said through tears. As her words faded into silent remembrance, her brother spoke up. “Nobody knows the struggle more than the family,” Nicolas said. “This was not a movie; this was the real world.”

The family reunited safely to face new challenges. The children did not speak English and struggled to keep up with their school classmates. Despite early difficulties, Mario Sr. was determined to provide his family with a life he didn’t have. “I became an adult at 13,” he said, “and I didn’t want that life for my children.” 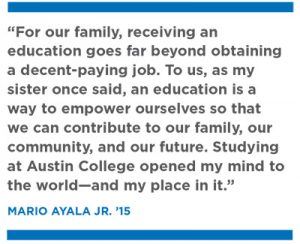 Mario Sr. began painting and remodeling houses and built his own business. Esthela raised the children, who always knew they had one obligation: to stay in school. Their dad was intent on seeing that obligation fulfilled. His children worked with him each summer; he paid them, but hoped they also took lessons from the experiences. “We were putting on a roof,” Mario Sr. said. “I told them, ‘if you don’t go to school, you will do this kind of work. If you go to school, you can own a house like this, own a business, and buy clothes and food.’”

Mario Jr. and his father became U.S. citizens in 2002; Esthela is a legal permanent resident. But none in the family forgets the journey that brought them to this point. Santiago, Nicolas, and Estela struggled with English even after entering Austin College. Santiago recalled a poor score on an Austin College test and the accompanying humiliation. A member of Pi Alpha Psi fraternity
on campus, Santiago said that in that group he was able to break through a personal barrier and share the story of his family. “I wasn’t ashamed to tell my fraternity brothers about our lives,” he said. “We were able to talk about immigration and what that means in the lives of real people.” 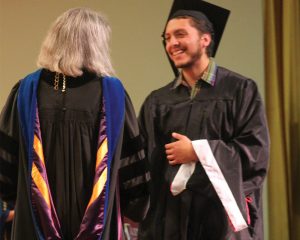 All the Ayala siblings worked on campus to help pay for their educations—which would not have been possible without scholarships—and some are still paying off loans. None, though, doubts the value of their education and experiences like study abroad. “I never would have imagined we could do that,” said Estela, who fell in love with Paris during a January Term and found a way to return there for an internship. Nicolas spent a study-abroad semester in Costa Rica; Santiago took part in the January Term Medical Experience in Mexico, working alongside a doctor in a rural clinic.

Mario, who would complete majors in art and business, came to the College aware of the travels of his siblings and knew he too “needed” to see the world. He spent his junior year in Florence, where he explored art in the cradle of the Renaissance and discovered his own purpose in art. He also spent a January Term in Mexico pursuing an interest in photography.

The entire family proudly arrived on campus in May to applaud Mario’s accomplishments. Many recollections included gratitude and amazement. Santiago recalled skiing in the French Alps and stopping, stunned because the realization of where he was and what he was doing was so surreal. That feeling continued as he was accepted to UT Southwestern Medical School where he began to fulfill his dream of becoming a family doctor—incredible because he grew up without insurance and had never visited a doctor for preventative medical care. This year, he and his wife and children moved to New Mexico where he was named medical director of a family medicine practice in Rio Rancho. “I have much to give because I have been given so much,” Santiago said. 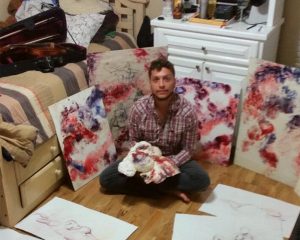 fter graduation, Nicolas attended the European University of Madrid and earned an MBA in sports management. When he graduated, his parents traveled to Spain and he took them to one of the world’s most famous soccer arenas. “Never in my life could I imagine that moment,” he said, adding his gratitude at sharing it with his parents. Returning to Texas, Nicolas worked for FC Dallas for a few years before founding and serving as president of Dallas City FC.

Upon graduation, Estela longed to return to Paris and was awarded an English Teaching Assistantship in France. Returning to the U.S. after three years, she earned a teaching certificate and taught at Skyline High School in Dallas. She just finished her second year teaching at Ursuline Academy in the World Languages Department.

Mario’s first love is art, and he plans to continue sharing that even as he joins his father in business. He described himself as an entrepreneur and artist and plans to explore the world of art in Dallas and further develop his father’s business. “The education I received at Austin College gives me tremendous confidence for whatever I undertake,” he said. “For our family, receiving an education goes far beyond obtaining a decent-paying job. To us, as my sister once said, an education is a way to empower ourselves so that we can contribute to our family, our community, and our future. Studying at Austin College opened my mind to the world—and my place in it.”

Mario believes his place in the world comes with responsibilities. “I very much believe that changes need to be made in society so that the opportunities I have received can be given to more people,” he said. “I am eager to begin my career, knowing the lessons I have learned from my family and at Austin College will enable me to be a part of the change that is so very needed. My success will mean nothing if I cannot extend opportunities to others in need. Though I do not yet know exactly how I will achieve this, I know that with the education I have received, I will meet people along the way to help me attain this. Nothing up to this point has shown me that it will be otherwise.”

After Commencement, Estela wrote on Facebook of the tremendous blessing it had been to witness Mario’s graduation, the courage and laughter she sees in her family, and the tremendous sacrifice her parents made to provide better lives for her and her siblings. She offered thanks to “every teacher and every professor that pushed us,” adding, “I’m so proud to say … we’ve made it.”

“My siblings and I always were aware of the importance of staying in school and living by the pillars of character that my parents lived before us,” Mario said. “We will never, ever forget what we’ve been through and the opportunities we’ve been given when many other people didn’t get this chance.” 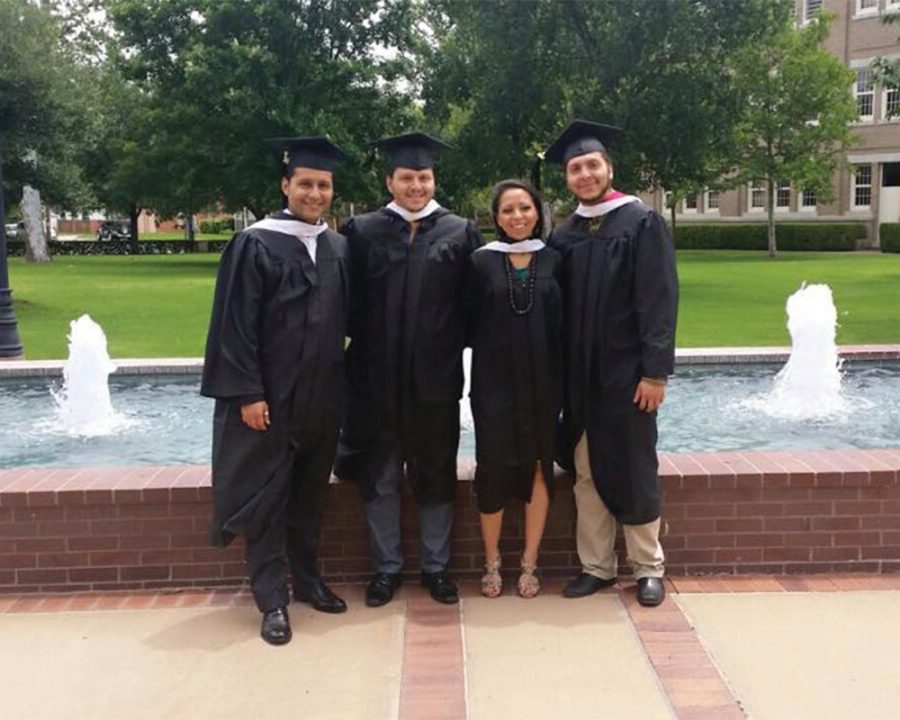