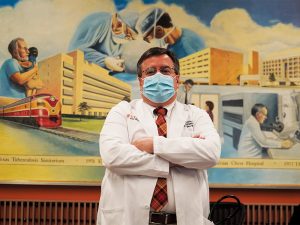 uring summer 2020, Jeff Levin, M.D., ’79 was sometimes called the “Dr. Fauci of East Texas.” The doctor who spent his career at The University of Texas Health Science Center at  Tyler (UTHSC–Tyler) became the area’s voice for public health and safety.

Since 2014, Dr. Levin had served as the Local Health Authority for Smith County, but when COVID-19 was declared a pandemic, he became a tireless voice to keep the public informed with  updated health and scientific information. He was instrumental in the Emergency Operation Center co-led by the City of Tyler and Smith County, and at the forefront of keeping leaders informed  to best serve their citizens.

Additionally, as the designated “Responsible Official” for the Public Health Laboratory of East Texas, Levin oversaw the laboratory during its transformation to a COVID-19 testing center for  patients all over East Texas, working to ensure that the lab prioritized testing procedures so that medical professionals, first responders, and vulnerable patients could obtain accurate results.

Though Levin considered the Dr. Fauci reference an extreme honor, he said it exaggerated his role—though he definitely believes in following science and basing decisions on evidence. Others see  the wisdom of his words.

In July, Levin was a 2020 co-recipient of the W.T. “Doc” Ballard Award for excellence in public health, given by the Northeast Texas Public Health District as its highest accolade for outstanding  service.

After a career with UTHSC–Tyler that included many roles, from Professor to Vice President for Academic Affairs to Provost, Levin retired in August 2020. Originally, it was the center’s  Occupational Lung Clinic and work with asbestos disease that drew him to the Health Science Center. He didn’t plan to stay long. Thirty-two years later as he retired, he and his wife, fellow ’Roo  Ginny Harleston ’79, look forward to new adventures together.

Jeff graduated from Austin College in 1979 and headed to The University of Texas Medical School at San Antonio, graduating in 1983. He then completed a residency in Internal Medicine at the University of Missouri and a residency in Occupational Medicine at the University of Kentucky, while earning a master’s degree in Public Health. He is board certified in both specialties of  medicine and holds a doctorate in Public Health (DrPH) in the areas of Epidemiology and Environmental Health.