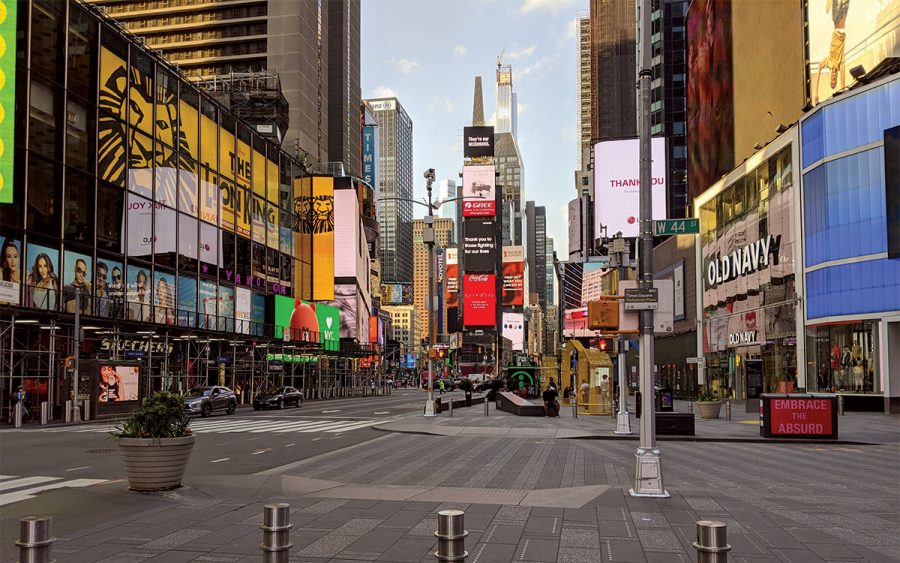 ’Roos Responded in 2020 from the front lines of all walks of life; the next pages offer glimpses into a few of those ’Roo experiences. Every story represents many ’Roos—some leading, some serving, some planning, some just hanging on through 2020 and into 2021. As you respond professionally and personally on every front, our thoughts—and our thanks—are with you all. — The Editors 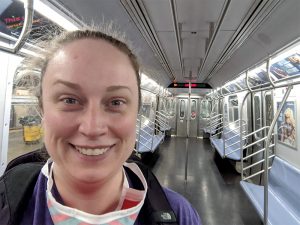 oven through the education at Austin College is the message that each of us can make a difference. I couldn’t save the earth, but I could go with my sorority to volunteer at Sneed Environmental Research Center. I couldn’t fix all of the disparities facing children in low socioeconomic households, but I could go with my Psychology class and give one little girl more individual  attention. The belief that each of us doing our part will together improve the world is a hallmark of an Austin College graduate.

I completed my Master of Science in Nursing degree and passed certification to be a Psychiatric-Mental Health Nurse Practitioner as the calendar flipped to 2020. I had spent the last decade working as a Critical Care Nurse, which I loved, but was ready to move into a different role. I accepted a position on a medical center’s Geriatric Psychiatry team and started counting the weeks until my credentialing came through and I could start.

Meanwhile, the medical community began bracing itself for the incoming COVID-19 impact. My future employer understandably delayed all new employee start dates until it could work through the emergent changes and preparations. Then the images and pleas for help started coming out of New York. My ICU had already hired and trained my replacement. A state-of-disaster-level pandemic had landed in my country. I was in a position to respond with desperately needed skills. It was later odd to me when people started commending my bravery. Bravery hadn’t occurred to me; I was just doing what I could and should. I couldn’t stop COVID-19, but I could do my part. Easter Sunday, five days after I first sent out a few emails asking if I was needed, I had a signed contract and was on a (mostly empty) plane headed to New York City. 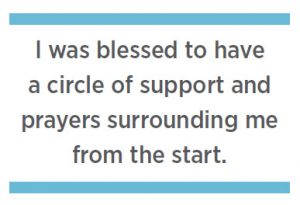 I was blessed to have a circle of support and prayers surrounding me from the start. One of the first to reach out was my Alpha Delta Chi (ADX) pledge sister Dr. Nicole Corrigan-Garrett ’02, a Dallas pediatrician. She sent me a message of love and prayers my first week in NYC, then asked, “What do you need? How can I help?” I assured her I didn’t need anything; I had brought my own full-face gas mask and was in a safe hotel. She wasn’t deterred and insisted there had to be something she could do. I looked around my sterile hotel room (except for a couple of pictures my own sons had drawn) and thought about the similarly barren break room of the Cardiac Intensive Care Unit (CICU) I was helping. Could her kids mail me pictures they drew? “Really?” I described the bleak physical environment we were in, away from our families and working impossible hours against a daunting opponent. 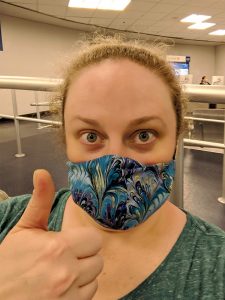 The hotel shuttle was making a hospital loop twice a day, delivering the next shift of RNs and bringing back the last shift’s exhausted group. That was all we did, sleep and work. We technically had a day or two off per week, but only a few (with medical conditions themselves) took it. With the colossal shortage of staff, nurses were working every day. There was no staff COVID testing; if you were physically capable of showing up, you worked. Get up, shuttle to the hospital, fight a losing battle for 12-13 hours, shuttle back to the hotel. Leave your shoes in the hallway. Drop your bag immediately inside the door, and go straight into the shower. Undress in the shower, and scrub. Remember, at that point, we still knew so little about the virus, and we weren’t taking chances. Step out of the shower and into sleepwear. Place scrubs into a trash bag that would be dropped off at the front for professional cleaning. Spray the shower and your bag with whatever disinfectant you had managed to find. Maybe eat dinner, just as often collapse directly into bed. Get up eight hours later, put on scrubs, go to the shuttle. I know the hospital’s staff nurses were living similarly. The morbidity and mortality numbers were horrific. We were throwing rocks at Goliath. 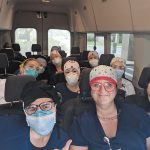 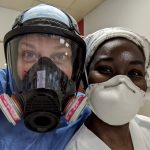 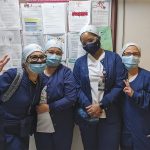 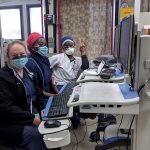 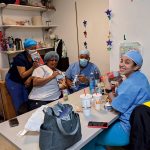 The area’s mail system was struggling, so the hotel was only getting USPS deliveries two to three times per week. Yet less than a week after my texts with Nicole, I stumbled off the shuttle one night to find a small package and several brightly colored envelopes. The package was from my ADX big sister, Rev. Leigh Wisner ’01. Inside were several drawings and crafts from her kids, with a  letter from Leigh that was as close to an actual hug as she could send. The cards were from a few other Alphas, most with kids’ drawings. I put all of the pictures and cards on my mirror and the crafts on my bathroom counter before going to sleep.

The next morning as I got ready, I kept looking at the kids’ artwork and grinning. I took pictures of them and shared them with the other nurses on the shuttle, my heart a little lighter than it had   been since arriving. I wound up promising several that we could make a traveling exhibit so they could wake up to them, too. But that plan was soon set aside. I had only given the kid art  suggestion to Nicole and one dear neighbor. But the neighbor put the request on our neighborhood Facebook page, and Nicole did the same on the ADX page. Early on, Dr. Maheshika Sivathasan  ’03 copied the ADX post over to the Austin College Alumni Community page. I had pictures, cards, and crafts pouring in from Texas and beyond. I got mail from alumni who graduated before I  was born and from current students. There were drawings, prayer cards, macaroni chains, and wood ornaments, and an egg-carton caterpillar received a place of honor on the mirror frame’s top ledge. I gave items to any of the other nurses who asked. What had been a numbing routine was now broken up each night as I made sure to send a thank you to every child, person, or family I  heard from. I particularly wanted each kiddo to know that their effort was making a difference to all of us on the front lines. I considered it future Kangaroo education to show their individual contributions were making a difference to strangers they would never meet. 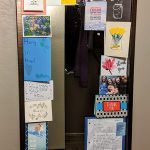 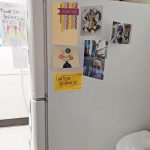 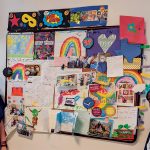 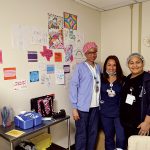 My mirror was quickly full and the mail kept coming. The CICU break room wall had one child’s picture, and otherwise, fliers and notifications that were mostly outdated. I asked the director if I  could take down the expired pages, reorganize the rest, and put up support mail from Texas. He consented. By that time, our amazing military had arrived with enough seasoned nurses to more  than double the staff, so we were actually getting short lunch breaks. The next day, another nurse and I spent our lunch break making the transformation.

It’s hard to fully explain staff reactions when seeing the display for the first time. The initial reaction was always confusion. (To my knowledge, there was nothing like it anywhere in the hospital.) Then smiles. Laughter. Tears. Cell phone pictures. Entire breaks were spent looking at each picture and reading each card. Seeing my name mentioned in several cards, many came to thank me.  My repeated response was, “That’s how Texans roll.”

The weeks went on. As the COVID-19 tide changed, trauma numbers suddenly exploded. My last two and a half weeks, I worked in the suddenly overflowing trauma ICU. They had a similarly barren breakroom transformed by Kangaroo kid artwork. The CICU break room was even being visited from non-unit staff who had heard about the Texas board. Trauma ICU was a locked unit, but their wall still had high viewing numbers by the trauma service nurses, techs, respiratory techs, and residents.

As we all now know, our efforts to halt COVID-19 fell short. For most of my time there, the hospital morgue overflowed into 10 large refrigerated trucks. Inside the CICU, a few thought they faintly  heard something one day above the constant din of beeps and alarms. We learned after shift change about the incredible parade of fire and police who had circled the hospital with horns and sirens to show support. 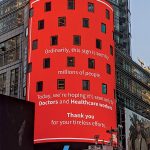 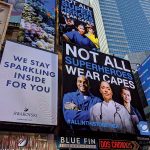 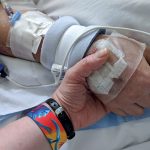 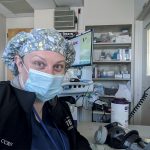 Important drugs got rationed, the PPE gown quality became more and more dubious, the staff’s COVID rate of infection (and deaths) grew. The group I was with was offered contract extensions,  which every nurse declined. But by early May, we usually got a lunch break. Instead of inhaling a protein bar and using the restroom twice per shift, we got to sit in the break room and eat real  food—surrounded by cards and every possible type of children’s artwork—feeling the love, support, and prayers sent to us by Austin College alumni. With our overwhelming gratitude and  appreciation, that is what I would like an article about my time in NYC during COVID-19 to be about.