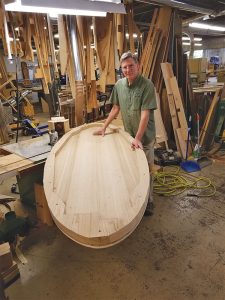 ith the work of his hands, Erich Thompson ’78 crafts hope and faith into form. As he designs and creates chancel furniture for sanctuaries and worship centers, he aims to capture the mindset and mission of each congregation. “The pieces reflect a congregation’s worship, whether or not people are in the building,” he said.

Erich earned his Austin College degree in philosophy and communication arts and later completed a doctorate at Union Presbyterian Seminary. He spent several years in ministry, so he understands the utility of each piece he creates in his shop in Greensboro, North Carolina. 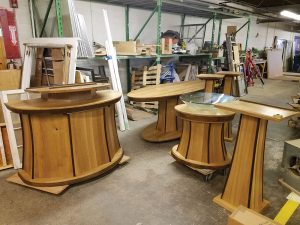 “At Austin College in a course called ‘Heritage of Western Man,’ we studied The Ascent of Man by Jacob Bronowski,” Erich said. “It is undergirded by the idea that the history of Western  civilization is more than a study of power and land swaps and speaks to the idea that art is the actual expression of important ideas. The way we lay groundwork, draw from and find new ideas, and discover ways of doing things is through the arts.” All those ideas are called up as he designs, he said, because his Austin College education instilled that method of processing in his mind. “My choices are not accidents; they are intentional and informed.”

Woodworking had been an interest of Erich’s since he was a young boy. In high school shop class, he learned the basics. “Woodworking grows on you, and you grow into it,” he said. During a 1995 mission trip, his woodworking skills led to his assignment in the cabinet shop, immersed in the materials, design, and tools of the trade. 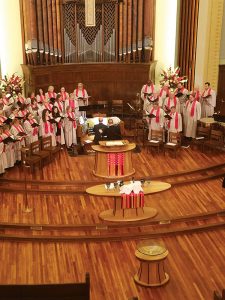 “In the cabinet shop, I was rediscovering a facility for woodworking,” Eric said. “On returning home, I found myself dreaming of pushing lumber through a saw and cutting with remarkable precision.” What had been a hobby then became a passion. Over time, he put together his woodshop where those dreams would become reality.

While designing a set of chancel furniture, he works closely with a congregation and its leadership to meet their goals. A suite of chancel furniture, including the baptismal font, table, and pulpit may take years to design, refine, and produce. “This is a ministry, not a manufacturing process,” said Erich. “Piece by piece, suite by suite, these are an expression of space, mission, and a call to ministry.”

See behind-the-scenes preparation
photos and more about his ministry.