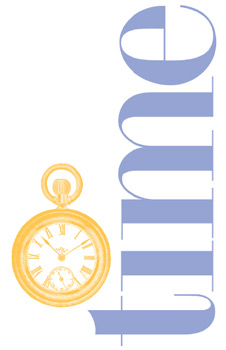 Professor of Physics Larry Robinson has been teaching Austin College students about mechanics, electronics, pendulums, optics, and the effects of forces upon systems for 40 years, but now one constant is moving him to retire—time.

“I have really enjoyed teaching—I still enjoy it—but I have other things I’d like to work on,” he said. “It’s time.”

Larry’s interest in physics began long ago. “I took physics in high school and was sure that was what I wanted to do, and I never deviated,” he said. “I enjoy the application of math to science.”

After earning his bachelor’s degree in physics, master’s degree in nuclear science and engineering, and doctorate in physics from Virginia Polytechnic Institute, Larry began looking for a place to begin his full-time teaching career in 1969. While completing his studies, he was a research and teaching assistant at VPI and spent two summers working as a physicist at the U.S. Naval Research Laboratory in Washington, D.C.

His search for a faculty position led him to Austin College. “I was looking for a teaching position at a smaller institution. I thought it would be more comfortable and a better environment in which to teach,” he said. “I liked the community atmosphere, small size, and colleagues at Austin College; it was a good fit.”

Apparently. He remained at Austin College for the next 40 years, teaching classes such as Electronics and Classical Mechanics,” which was for more advanced students, and “Introduction to Modern Physics,” open to students at all levels—and enjoying all of them.

Though he spent his entire career at the College, his interests and involvements continued to evolve. He took particular pleasure in courses with a lab aspect, and developed several new lab experiments in use at the College. “I’ve always enjoyed Mechanics—forces, looking at what a force can cause a system to do,” he said. 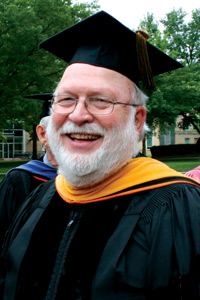 His courses weren’t confined to the physics lab. Larry and Professor of English Carol Daeley often talked about creating a course that would examine how Newton’s optics related to 18th century literature and philosophy. Though the course never materialized, they were able to introduce the concepts in existing courses. Larry also worked with Ricky Duhaime, professor of music, to present a course on the physics of music.

Carol, who has been Larry’s colleague for more than 35 of his 40 years at Austin College, said Larry was one of the first people she met at the College—in the beginning of a long friendship. “To Larry, physics explains the world. I think it puzzles him that others don’t see that,” she said. “When we worked together on Heritage 44, ‘Models of Scientific Thought,’ he was very good at developing ways to make science clear to the non-scientifically inclined. He has an incredible clarity of mind that I’ve always admired.”

When Larry was in graduate school, lasers were just becoming available, and he became interested in lasers and holography, areas that led him into the study of optics. In the 1980s, he spent a sabbatical at the Institute of Optics at the University of Rochester. He continued his interests in both areas and received a National Science Foundation grant so that Austin College could purchase lasers and instrumentation that would allow him to create an optics course for his students.

Throughout Larry’s Austin College career, he was recognized for his emphasis on his students. He was named the Donald McGregor Chair in Natural Sciences in 1992 and received the Austin College Excellence in Teaching Award in 2003. He served as dean of sciences and participated in numerous campus committees and efforts, including serving as sponsor of the Physics Society and several years as sponsor for Kappa Gamma Chi sorority.

But now he feels ready for more of his own pursuits. At the close of the spring term, he officially retired and was named professor emeritus of physics. In recent years, he has developed a new lab interest—the woodturning “lab,” that is, using a lathe to carve wood into bowls and pieces of art. (See a bit of his handiwork below.) He is looking forward to having time to spend in his workshop, something that was difficult while teaching at the College.

Retirement also will allow Larry to spend time traveling with his wife, Joyce. They are considering a move to Austin, Texas, to be closer to their children—and the grandchildren that bring a smile to his face. Joyce, a long-time high school teacher, left teaching a few years ago so is a little ahead of Larry in “perfecting” retirement, as he put it.

He’s anxious to catch up. 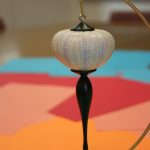 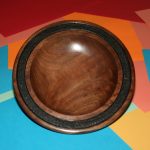