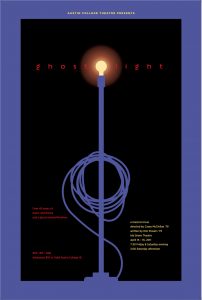 Tales of Mortimer, the theatre ghost, have been around for decades. So, when a group of alumni creep into Ida Green Theatre, sounds from elsewhere in the theatre easily are attributed to the old ghost. Instead, the alumni encounter four current students rehearsing scenes for a play. They begin to talk and soon the alumni are telling stories of Mortimer and their experiences in performances past. That scenario portrays the overall premise of Ghost Light: Theatre, Music, and a Ghost Called Mortimer, a musical revue that brought together alumni and current students to lead audiences through four decades of iconic music, plays, and performances at Austin College.

The production was conceived by Casey McClellan and Kim Powers, both 1979 alumni. Since graduating, Casey has returned to campus more than 25 times to work with students and alumni on productions, including Waiting for a Kiss (written by Kim Powers) in 1994 and Working in 1999. “I have seen how the flow of energy, talent, and caring moves back and forth from current student to alumni, from future to past,” Casey said. “That enriches the individuals involved, enriches each audience member, and enriches the school. And I have been enriched personally to experience the transition from wonderfully new, fresh, and receptive undergraduates to knowledgeable and nostalgic alumni—the future becoming the past and informing the future. That’s the essence of education.” 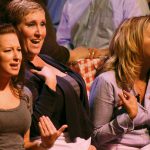 The alumni involved with Waiting for a Kiss and Working had had more than 10 years to “recover” and in 2010, comments were beginning to pass among alumni that it was time to do something else at the College. Conversations began, ideas were tossed about, and before long, a plan took shape.

Kim wrote the play, and Casey directed the production that involved 15 current students and 25 alumni, representing Austin College performances since the opening of Ida Green Communication Center in 1972. Marc Daniel ’83 and Scott Metelko ’88 soon were brought in for their expertise: Scott to design and build the set; Marc to produce and coordinate logistics.

This was no backyard “let’s put on a show” idea, but a full-blown theatrical and musical production. So, who was going to bring the production to life? Once the call went out, alumni from around the country were signing up, joining their friends and former theatre cast members. Of course, these alumni have busy jobs and lives—and yet they were to stage a musical on campus? As astounding as it seems, they did indeed. 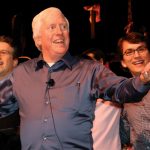 Many had returned to Ida Green Theatre before to be part of the cast and staff of Waiting for a Kiss and Working. Of course, in those days, casts were formed though letters and phone calls; this year Facebook allowed quick outreach to a broader range of individuals.

With a brother 12 years older who also was involved in theatre at Austin College, Kim grew up with the legend of Mortimer. As plans for a new production took shape, Kim said the idea came to him to use Mortimer as a device to pull together and tell the story of the history of Austin College theatre.

During the planning and production, the alumni realized that Mortimer is not the only ghost at Austin College. “Ghosts of all the characters from all the plays ever performed in Ida Green are there,” Kim said. “Those characters never leave the stage.” Ghosts, too, exist in the form of the young students the alumni once were, the interactions they shared, and in friends—including professors and classmates—who have died in the intervening years. 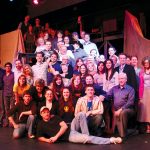 The weeks of preparation were extremely emotional for some of the alumni—and not just because of the exhausting schedule they maintained. “Theatre here meant so much to us,” Kim said. “This was our home and some of us are rediscovering that. We see now how precious life is.”

Too, the play included scenes about actual past experiences of alumni in the play. “A lot of realism is interwoven into the show and parts are very personal,” said Carrie McLarty ’81. “We used to do seven to eight shows a year here and then go to Mo Ranch and do more. Watching the set go up is familiar, and it’s a comfortable feeling to be back in this environment.”

The schedule was demanding. The creators of the project made several trips to campus from Homecoming 2010 until the April show. Auditions for current students were held in February; in April, Casey moved to campus for intensive work with the musicians and students. 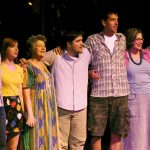 Alumni cast members across the country were assigned parts and sent music and scripts, expected to be prepared to finalize the production with only a few days’ rehearsal in Sherman. In the final week, several principal players came to Sherman for long days of rehearsal; many living in Dallas drove to Sherman each evening and returned to their jobs the next day. A final two days of rehearsal finally brought the full cast to campus.

The rehearsal schedule seems even tougher considering that, for most alumni, the weeks at Austin College were “vacation” time. Casey is the production manager of the New York Pops at Carnegie Hall and founder of a business services consulting firm in New York City. Kim Powers is a writer and producer for 20/20 and other programs at ABC New York; Marc Daniel is an associate compliance officer and systems developer at AIG. Scott Metelko owns a set and stage design business in Orlando, Florida; Cindy McNabb ’80 is a psychiatrist in Olympia, Washington; Carrie McLarty is a Texas administrative law judge in Houston. Anne Groben ’86 is president of Sizzle Promotion in Dallas; Sarah Lien Finnerty ’93 is a children’s minister in Raleigh, North Carolina. The list goes on.

So why did they do it? Most who were asked that question had the same answers: love of theatre, love of friends, love of Austin College. “I don’t always get to work with people with this level of commitment,” Scott said. “Everyone involved cares deeply about the project and all have removed their egos from the production.” 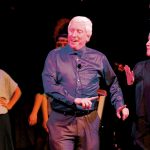 For Casey, the production was about the future and the past. “I owe a great debt to Austin College,” he said. “My years here opened my eyes and opened my mind. Theatre and music were major forces in that process. It is important to give back.”

Casey explained that as this show took shape, he saw another opportunity to give back: to show current students that they are part of a much larger history and to give them a chance to see into the future. “I also saw how alumni could see into the past, remember what we learned, and then share what we have learned with current students,” he said.

Kim said the production also was something of a belated welcome gift for President Marjorie Hass. “Though this is a tribute to the history of the College’s theatre, it also points to the future and to future generations,” he said.

“To be back on stage with people I love is incredible,” Sarah Finnerty said. Her decision to come to campus was not based on what her role would be in the play. “What mattered was just the idea of being part of a community.”

But she didn’t come simply for herself. “It’s important for the current students to see where we’ve been and what we’ve become,” Sarah said, “to see where a liberal arts education can take you.”

Marc said when he was in college, the Theatre Department often brought in guest artists; he particularly remembered time spent with Vern Sutton ’60. “We had that tradition as a way to meet alumni in the arts, and it is important to share that rich network of people with current students.” Marc added that since many question the value of an education in the humanities, it is important to understand that opportunities like directing or producing a play fundamentally are business management and have applications in every aspect of life.

Many of the alumni reprised roles they had in college productions, as Sarah did performing “It’s Our Time” from Merrily We Roll Along. “Then I was a bright young college student, now I’m here as an alumna and I’ve come full circle. We’re all facing the ghosts we have here.” 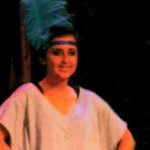 Current students, too, put many hours into the Ghost Light production. Lesley Wayler ’11, who had never taken part in a theatre production, first was recruited to search the College Archives for photos of past theatre productions. Then she became dance captain. Soon her days were a blur of activity as she balanced rehearsals and other production obligations with an already full schedule. “Ghost Light was an experience like none other and revolutionized my life,” she said. Apparently so. She now is working as a production assistant with ABC in New York, thanks to the networking assistance of Kim Powers. Read more of Lesley’s comments online.

A DVD recording of the production and souvenir program highlighting photos from four decades of productions in Ida Green Theatre are available for sale with all proceeds benefitting Austin College. To purchase materials, email Marc Daniel at jmdorclm@me.com.