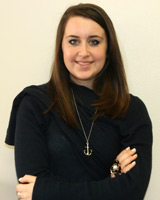 “Ghost Light was one of those experiences that for me, put Austin College in Loren Pope’s book Colleges That Change Lives.

I was in search of a job in February 2011 and Jeff Ridenour 11, one of the lead student actors in Ghost Light put me in contact with Kim Powers, the playwright. Kim was super enthusiastic about helping me find a position at ABC (where he works), and I was so grateful. It was through talking with him that Ghost Light came up. He noticed that I was the student videographer for Institutional Advancement and asked if I would could help out with the musical. I was more than pleased to help. It really was the least I could do. He put me in contact with Marc Daniel who became my boss for the video/photography side of things. My first task was to search for old photos of Austin College plays in archives. Here I worked with Archivist Justin Banks to find photos buried in old yearbooks.

Shortly after, I became the dance captain for the production. Casey McClellan, the director, was in need of someone who could essentially be his personal assistant when it came to choreography, so I stepped up to the plate. I’m not going to lie; Ghost Light was completely foreign to me. I had never done theatre before and there were times I felt completely lost. But the fact that I had so many people supporting me and guiding me along the way made the time commitment so much easier and enjoyable.

Once the three weeks of Ghost Light preparation (crunch time) started, my days became a blur. Yes, Ghost Light practice was time consuming and at times very overwhelming, but I held a position where I was asked to be leader. I really was amazed that Kim, Casey and Marc put so much of their time and effort into a production that easily could never been finished, and for that, I admire them. Their dedication taught me alot about how I can contribute to Austin College, a place I truly love as an alumna myself. At the end of the day, Kim, Casey and Marc gave me the chance to step up to the plate and be the leader that I’ve always wanted to be, and I’m so grateful.

As a recent graduate I do see myself coming back and participating in something similar to this on campus. While the ‘ghosts’ in the theatre meant something different to me because it was my first time participating in a theatre production, they still made an impact. I had the opportunity to work on this production from so many levels. It was during the second week of Ghost Light preparation time that I came to realize that we’re all ‘ghosts’ at some point in our lives. During this whole production, I was able to see ‘ghosts’ of alumni who have passed away as I found photos in the Archives and I met ‘ghosts’ of alumni who are still alive and who I had the opportunity to work with. Now that I’m a graduate, I’m a ‘ghost’ too. I’m a ‘ghost’, not only of the theatre, but of Austin College as well.

Ghost Light was an experience like none other. It was a revolutionary opportunity given to me by Austin College and will always be one of those memories that I look back on and say ‘wow that really changed my life.’

Networking is so important these days. As a result of Ghost Light and all the hard work I put into it, I managed to land a freelance production assistant position at ABC, the corporation where Kim Powers works. With the economy where it is, students should feel comfortable asking the people they know about positions or jobs if they see themselves moving into the work world after Austin College. Part of what makes Austin College so wonderful is that they have those people for their students. The alumni were once students themselves and understand what it feels like to be a senior or a recent graduate in need of a job. On top of understanding that feeling, from day one, the alumni of Ghost Light showed a dedication to current students and our futures in a way that I never expected.” 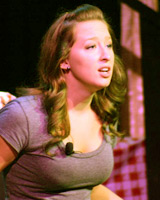 “Ghost Light greatly impacted not only my life, but also my brother’s, who was part of the production. It was an amazing experience to work with the alumni because they welcomed all of the current students, not just as current students, but as fellow performers. Everyone became a family by the end of the show. During the last few performances, most of us were crying bittersweet tears because we would be leaving great friends but we would soon be able to have our sleeping schedule back! The networking between alumni and current students is incredible because everyone is happy to help and give advice when needed. Facebook has definitely helped with the networking!”