Ask Light Cummins nearly any question about Texas history—then sit back and enjoy the answer. Questions could go on all day, and still Light would have answers, providing little known facts and stories, all in the rapid-fire, raconteur style that Light has honed to an art form.

Light, the Guy M. Bryan, Jr., Chair of American History at Austin College, has told amazing historical tales for decades. In the 33 years he has been a member of the Austin College faculty, he has taught and inspired hundreds of students, written several books, received numerous professional honors, and delivered many distinguished and entertaining presentations.

Appointed in May 2009 to a two-year stint as State Historian of Texas by Texas Governor Rick Perry, Light gathered even more stories. The appointment as State Historian may have been the role for which Light had been rehearsing all his life. His assignment: to encourage the teaching of Texas history and to enhance Texans’ knowledge of the state’s history and heritage—in essence, discovering and sharing history—just what he loves to do.

Austin College celebrated Light’s contributions to history as State Historian in April. During one session, Light shared “Travels with the State Historian of Texas”—and travel he did. “In these two years, I have traveled nearly 40,000 miles by car in my role as Texas Historian—then add in air travel,” he said. “I’ve been amazed by the geographic diversity of Texas. I’ve been to probably 75 percent of the counties in Texas—and never been as both hot and cold as during the last two years!”

Light said the experience was fascinating and life-changing. “I’ve been to the largest cities in Texas and to towns too small for stoplights,” he said. “It’s been a remarkable education on Texas and what Texas is today. I have met thousands of people; mostly all are hardworking, honest, God-fearing people who get up every day focused on doing the right thing.”

He maintained a blog site chronicling his activities as the State Historian, some of which were ceremonial as he represented the State of Texas at history-related events. He gave at least 100 speeches across the state, ranging from formal addresses in hotel ballrooms containing several thousand people, to sitting in a small circle of chairs chatting with members of a county historical group. One of his favorites was his April 2010 San Jacinto Day address to a large assembly in a Houston country club ballroom, as he sat on the stage and saw all the Texas public personalities sitting in his audience.

Light visited schools, talked to elementary and secondary school students, trained hundreds of teachers, and worked with the State Preservation Board and the Texas Historical Commission on monuments, memorials, and statue installations. 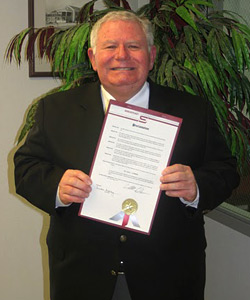 He did find one area that was not perhaps his expertise. Serving as historical advisor for a Texas Historical Commission archeological excavation in south Texas on what had been a working plantation in the 1830s, Light was allowed to do a bit of field work. He shortly was advised he should “stick to history.”

One of Light’s favorite activities was visiting archives, museums, and libraries around the state, meeting the staffs and listening to their comments about Texas history. He also routinely answered the queries of newspaper, radio, and television reporters, as well as staffs of politicians and legislators, looking for sources and details of Texas history. He wrote magazine articles and contributed to a newspaper column that addresses various aspects of the state’s history.

In fact, he completed so many interviews, he sometimes lost track. Light said that in January he was listening to KRLD radio when the announcer mentioned he would be airing an interview with a “very distinguished historian.” Light, quite interested to hear the interview and the historian, was surprised when his own voice came on the air.

During his day of celebration, many historical professionals and alumni gathered to pay tribute. That day, Light told his audience, “I have stood on the far southeastern corner of Texas at Sabine Pass and looked across at Louisiana. I have been to the farthest reaches of the Texas Panhandle and looked across at Oklahoma. I have been to the Rio Grande and seen Mexico across the river, while I have been to El Paso and looked west to see New Mexico. I have straddled State Line Avenue in Texarkana with one foot in Texas and the other in Arkansas. Now, as my term as State Historian draws to a close, I am left with the memories of a lifetime.”