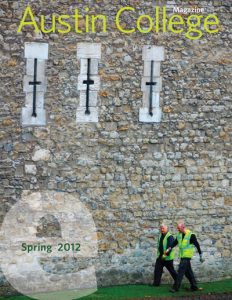 From the President
Spring has definitely arrived on campus. The sun is shining, students are completing honors thesis and final projects, and faculty members are planning summer research projects.

Postcards from Abroad
Every year, Austin College students travel to magnificent sites around the globe. Thankfully, they can share a bit of their experiences with family and friends through their photography.

Costa Rica Sisters
Amanda Newton Kisselle ’04 studied abroad in Costa Rica as an Austin College student, she lived with a family there that truly became family to her. She has visited many times since her first summer there for an intensive language program.

An American in … Bucharest
Andra Troncalli, associate professor of physics, spent a Spring Term 2011 sabbatical in Romania. Returning to campus for Fall Term 2011, she offers some reflections on her experience.

My Internship in Congress: More Than Resumé Filler
Eristeo Perez ’12 spent Fall Term 2011 in the Washington Semester. He writes here of his adventures during the experience and his changing thoughts about his future career.