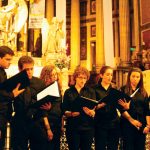 Austin College choral ensembles have taken their music on the road for more than 100 years. Even in the 1890s, the original Quartette boarded the “Interurban” train that ran down the middle of what is now Grand Avenue and traveled as far as Dallas and Fort Worth to sing concerts of popular glee club music. 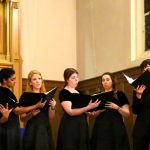 The A Cappella Choir took its first international tour in 1957. After an overnight stop in New York City where the singers slept on the floor of a TV studio so they could sing on the Today Show early the next morning, the ensemble crossed the Atlantic for a whirlwind series of performances in concert halls, cathedrals, and international embassies throughout most of the countries of western Europe. While common for college ensembles today, American choirs were seldom heard in Europe in the 1950s, and telegrams describing the A Cappella Choir’s performances crisscrossed Europe and the Atlantic as the ensemble found itself in demand for more and more performances. 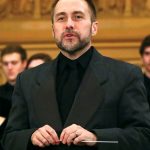 In the end, it was the choir’s appearance at the Spoleto Music Festival that would become legend in the history of Austin College. Director Robert Wayne Bedford led the upstart Austin College A Cappella Choir to a third-place prize in the “small choir” division of the festival. This was the first award for an American choir at such a highly respected European competition, and it ensured that concert tours would remain an important part of the A Cappella Choir’s yearly schedule.

Today, the Austin College A Cappella Choir, as well as smaller vocal ensembles such as the Consort and Quartette, tour annually throughout Texas and in destinations such as Chicago, Washington, D.C., New Orleans, and this past spring, California. International tours have continued every four years since 1971, and destinations have included all the countries of western and central Europe as well as the United Kingdom and Australia. Today, when international choir tours have become big business and regular events for countless choirs each year, the A Cappella Choir still manages to create extra special performances. In 2011, the choir sang the Sunday noon mass at Notre Dame Cathedral in Paris for over 1,500 parishioners and tourists. After the choir rehearsed in the cathedral the previous morning, one student said, “I looked up as we were singing and saw hundreds of people watching and videotaping us like we were celebrities or something!” 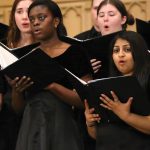 The singers now are saving their pennies for what they hope will be a two-week tour to New Zealand in May 2015, and planning is underway for a Texas tour in spring 2014. Whether for church relations, marketing Austin College to prospective students, or providing yet another unique international experience, the Austin College A Cappella Choir tour remains a central piece of student outreach and service at Austin College.