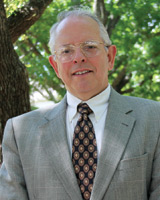 Austin College preparation for law school and careers in law comes not through a major or minor but a pre-law advising program. Frank Rohmer, advisor for the past 10 years, said the program is designed to help students understand whether their interests and talents truly intersect with the legal profession. Students complete academic majors and minors in whatever discipline they like, he said, explaining that the legal world is interested in individuals from different backgrounds and areas of study, increasingly including sciences.

To be successful in law school, Rohmer said, students need training in reading and interpretation of great literature, writing and speaking, and in courses that give them an understanding of the context of law—business, economics, political science, and history.

The College’s focus on law preparation comes from the pre-law advisor and Pre-Law Society, with leadership and insight from the Alumni “L” (Law) Association. Rohmer said his main responsibility is offering very focused one-on-one advising to students considering law school, something he develops through active involvement in regional and national pre-law advising organizations and awareness of the requirements and emphases of law schools around the country.

When Rohmer became pre-law advisor, his goal was to carry on the tradition he took over from Dr. Ken Street. Rohmer counts Street, as well as the late President Emeritus John D. Moseley, among his mentors, and their leadership inspired Rohmer to develop annual law symposiums and public administration symposiums so students could learn about the professions first-hand from leaders in the field.

Members of the Pre-Law Society helped Rohmer organize the first Kenneth W. Street Law Symposium approximately 10 years ago, and he said that students today have a great leadership opportunity in organizing these annual events with the “L” Association. The law alumni also regularly speak to the Pre-Law Society to provide guidance and insight on special topics of law and have made internships available to students, Rohmer said, particularly mentioning Judge Jim Jordan ’74 who has made summer internships possible for several students.

In speaking about law preparation at Austin College, Rohmer was quick to give credit to others. The four officers of the Pre-Law Society involved with creating the first law symposium unknowingly have had a great influence upon the experiences available to students today, he said. Those officers were Sara Giddings ’04, Sarah Russell Duff ’04, Tracy Hale ’04, and Cody Stapp ’05. They were quickly followed by Megan Rutherford ’06, Justin Almand ’06, and Morgan Atkinson ’07. Wanting alumni to receive proper credit, Rohmer began recalling names that are a bit of a “who’s who” of Austin College alumni: those involved in creating the “L” Association, Tom Hall ’78, Gary Johnson ’73, Keith Hopson ’73, Mickey Bonesio ’66; some who have been most critical in symposium planning, Fred Junkin ’86, Shannon Hutcheson ’93, Josh Imhoff ’93; and those who have taken the law symposium to new heights, Osler McCarthy ’73, Buck Files ’60, Jim Walker ’82, and Kevin White ’96. Those are just the names that positively couldn’t be left out, he said, but that so many more have had helped students to succeed.

“In recent years, I’ve seen Austin College law graduates go to Harvard, Yale, Stanford, Chicago, Michigan, Washington University in St. Louis, Vanderbilt, Duke, UCLA, Pennsylvania, Berkeley, Cornell, Tulane, NYU, and other nationally prominent law schools, as well as all the law schools in Texas and Oklahoma,” Rohmer said. “And they’re winning major scholarships to many of these. Austin College has a long tradition in successful law alumni— and I see that tradition continuing and growing even stronger.” 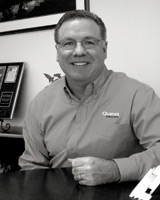 Those abilities, he said, can take students through the demands of law school and practice—or successfully into any career path. “An Austin College education provides students opportunities to develop these strengths and to successfully navigate future preparation as well as their careers.”

Kevin said he was fortunate to have Dr. Ken Street as his faculty mentor and also to benefit from his direction as the pre-law advisor. “His strong guidance that our actions in college would shape our future was critical in establishing a fundamental principle for success—personal accountability. His Socratic method of teaching Constitutional Law prepared many ’Roos for the realities of law school.”

In addition to providing legal guidance for Quanex, Kevin serves as the top human resource executive at the New York Stock Exchange company.