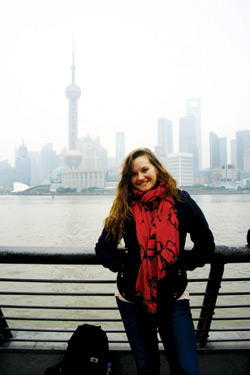 Here I am, drowsily boarding my 8 a.m. flight headed to Hong Kong, mind struggling with the all-important question of the moment: should I sleep now, or wait to help fight off the jetlag later? Twenty-four hours ago, I was lined up outside Moody Science Center with a few hundred other graduates, shoveling a donut into my mouth while simultaneously guzzling coffee and cursing myself for not pinning on my cap in front of a mirror. Needless to say, the last 24 hours have been quite the whirlwind—but this is reflective of the last four years at Austin College.

When I applied to colleges as a high school senior, I envied all those around me who had known what they wanted to do since their first day of kindergarten. To some schools, I applied as a mathematics major (laughable now, but I see this as proof that at one point in my life I understood those numbers and squiggles); other schools interviewed me for scholarships based on my desire to be a pre-pharmacy biochemistry major; and I still held out that perhaps I could major in my first loves of art or music. Yesterday, I graduated with a degree in international relations and Chinese—guess I got a little sidetracked.

With that, let me say that Austin College is very good at encouraging detours and sidetrack trips, a statement that I may need to explain. Most of us, when we go to college, don’t really have any idea of what we want. At the tender age of 18 we are forced to make a decision that will affect the rest of our lives. Everyone wants us to do what will “make us happy,” but I can tell you that what makes me happy now was not necessarily what I would have claimed four years ago. Detours have helped me realize what makes me happy, and what I hope will continue to make me happy throughout my life.

The first detour resulted from the freshman language placement test: everyone was taking Spanish (yet another major I considered), and I panicked when I realized that even fluency would not set me apart. My mentor at the time was beginning her second year at Austin College, working hard to develop a Chinese program. After a short meeting with her, I employed a skill that has since become incredibly useful throughout my life: going for it.

Chinese? Sure, why not? And thus began the detour that has changed my life—one day at a time, 50 minutes, every day. 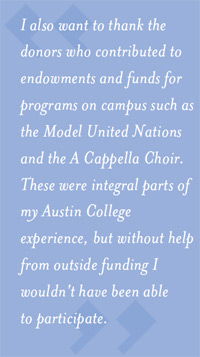 I decided that if I was learning the language, I had better supplement it with some knowledge of the culture and system, and in this manner met my mentor of three years and yet another of the most influential people in my life. If I were to tout any facet of Austin College, it would (and will) be the relationships that develop between mentor and student.What starts out as a series of advising sessions eventually evolves into a friendship. Very few of my friends at other colleges feel as though they can simply drop in on their professors to grumble about/plan their lives, but for me, not only was this normal, it was something that I relied on to get me through some tough times. My professors, and especially my mentors, at Austin College did not just encourage me to detour and experiment, but they were there for me whenever I needed them along the way.

I mentioned that the last four years had been a whirlwind, and truly they have been. I remember moving in to my fourth-floor dorm room in Caruth, trying to figure out how the heck I was supposed to fit all my stuff AND my roommate’s stuff into this tiny room with vaulted ceilings, and choir tours involving hours spent on a bus or plane getting to know my new “family.” I remember Jan Term my sophomore year when a very terrified me tried to act cool boarding my first international flight (to Berlin). I remember countless hours spent researching for Model United Nations, and the awe of being in the United Nations General Assembly Hall in New York. I remember rushing home from my junior year in China to be at graduation to see off friends, and leaving for France (on another choir tour) 10 days later.

Perhaps it’s because detours are encouraged that everything flew by so quickly. Or perhaps the detours just made time at Austin College so enjoyable that it was over before I knew it. Whatever the reason, the detours these past few years have made for the most amazing adventure, and set me up for many more. For this I thank you, Austin College.

Anne was heading to Hong Kong the day after graduation with her new job with the Osgood Center for International Studies in Washington, D.C. She offers another thank you to the donors of the Elizabeth Naylor Moorman Memorial Scholarship, “which was the reason I was able to attend Austin College in the first place,” Anne said.

Read the first-person account of the Washington Semester experiences of Eristeo Perez ’13.