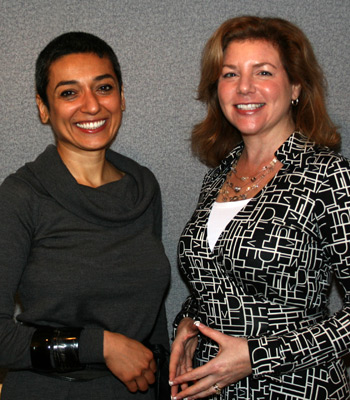 Women for Women International founder and CEO Zainab Salbi joined the distinguished ranks in February of those honored with the Austin College Posey Leadership Award.

The guest of honor at the 2011 GO Forum, Salbi spoke to students, faculty, and guests on campus in a public lecture and during a luncheon, before traveling to Dallas to continue the GO Forum events.

That afternoon, several Austin College students who had received Global Outreach Fellowships to fund service projects around the world shared their experiences with a group of Dallas high school students who had been invited to a special session with Salbi. Salbi spoke that evening to a capacity audience at the Wyly Theatre of the AT&T Performing Arts Center.

Since its founding in 1993, Women for Women International has served more than women worldwide, providing women survivors of war and other conflicts with the tools and resources to move from crisis and poverty to stability and self-sufficiency.

The Posey Leadership Award, which promotes and recognizes service and leadership in a global context, was created through the generosity of Sally and the late Lee Posey, founder of Palm Harbor Homes.

Nominations for the 2012 Austin College Posey Leadership Award will be accepted through May 1, 2011.