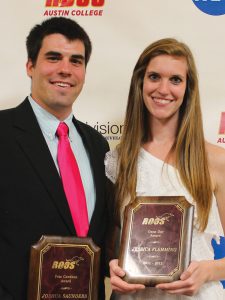 Josh Saunders ’12 and Jessica Fleming ’12 received top athletics honors in May, selected as the Pete Cawthon Male Athlete and Gene Day Female Athlete of the Year.

Jessica, a four-year starter for the volleyball squad, twice led the nation in statistical categories, was a two time First Team All-Conference selection, and was twice named runner-up for SCAC Player of the Year. In 2011, she was among the conference leaders in kills, hitting percentage, and blocks. Jessica completed majors in psychology and biology and has entered a training program with Abercrombie & Fitch with a goal to work in marketing at the company.

Josh, a four-year letter winner and two-year starter for the men’s basketball team, finished this season among the SCAC leaders in scoring, rebounding, blocked shots, steals, free throw percentage, and assists. He also was named to the SCAC Character and Community program. He completed majors in business administration and environmental science and has accepted a position with Lone Star Capital Bank in San Antonio, Texas.

Scholar-athletes named to the SCAC Academic Honor Roll for winter/spring sports: 58, a school record. In fall 2011, 53 Kangaroos made the honor roll that requires a 3.25 GPA for the term.

Athletes also participated in service projects, including fundraising for cancer research, working with the Special Olympics, and volunteering at local elementary schools.