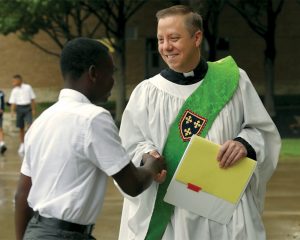 Tim Kennedy ’98 has had two distinct career paths since his Austin College days. Upon graduation, he headed to Washington, D.C., for a 13-year career on Capitol Hill, at the White House, and at the U.S. Department of Homeland Security. He spent 2011 to 2014 at Yale Divinity School, where he earned a Master of Divinity degree and an Anglican Diploma plus a certificate in Educational Leadership and Ministry from Berkeley Divinity School at Yale. He spent the next five years as Chaplain at Washington Episcopal School. In June 2019, he was ordained as a Transitional Deacon in the Episcopal Church, and he became the Middle School and Upper School Chaplain at The Episcopal School of Dallas in August 2019. Tim hopes to be ordained as an Episcopal priest in the next year. His Doctor of Ministry in Educational Leadership is in progress through Virginia Theological Seminary.