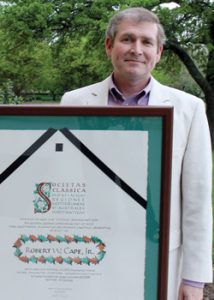 Robert Cape, Austin College professor of classics, was honored this spring by the Classical Association of the Middle West and South with the organization’s highest award for service to the group and the classics profession. Presented in Latin at the group’s annual meeting, the award recognized Cape’s contributions in promotion of the study of Latin in Texas and throughout the United States.

(By the way, the headline: He came. He saw. He conquered.)