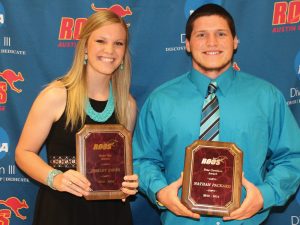 After earning preseason All-America recognition, Nathan had an outstanding senior campaign, earning SCAC Player of the Week honors and also being named First Team All-Conference at his linebacker position. He also was named to the National Football Foundation’s prestigious Hampshire Honor Society in recognition of excellence on the football field, in the classroom, and in the community. Nathan compiled 60 tackles in the fall 2013 season, including two sacks, seven tackles for loss, one interception, and one fumble recovery to lead Austin College to a 5-5 record, the best since 2008.

Shelby had a remarkable senior season, earning All-Conference, All-Region, and finally All-America honors while breaking the Austin College career record for kills, and finishing among the national leaders in both total kills and kills-per-set. She was selected last fall to the CoSIDA/Capitol One Academic All-District Team for performance athletically and in the classroom. She was the only SCAC player named to the team and one of only seven NCAA Division III players in District 8 to earn the honor. A former SCAC Newcomer of the Year, Shelby was an All-Conference selection each of her four years of play. She is a summa cum laude Austin College graduate.

Read more about Shelby Eaves, SCAC Co-Woman of the Year. 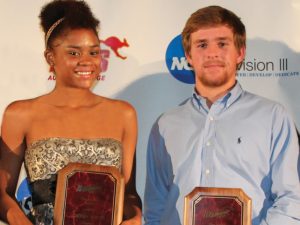 New talent is needed every year for the Kangaroo teams, and in 2013-2014, the recipients of the Tim Jubela Outstanding Freshman Athlete Award—Gus Daniel, baseball, and Cierra White, tennis—particularly excelled in competition.

In his first season with the ’Roos, Gus was an All-Conference selection after batting .330 with 13 RBIs. He surpassed all SCAC catchers with 23 runners caught stealing and an incredible stolen-base-against percentage of .451, easily the best in the conference in 2014.

Cierra finished her first season 11-3 in singles competition, recognized as an All-Conference selection and SCAC Newcomer of the Year. She was named to the SCAC All-Tournament Team and was a SCAC Player of the Week. Her record against conference opponents.

The award, established in 1970, honors Tim Jubela, an outstanding freshman football and baseball player from Palestine, Texas, who was fatally injured in an automobile accident in March 1969. Through the award, his legacy continues.

See all schedules and results!