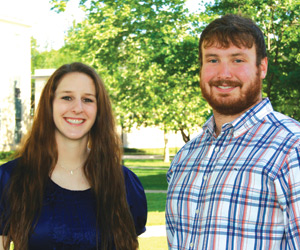 Top athletes Austin Light ’11 and Kaitlin Elledge ’11, winners of the Pete Cawthon Outstanding Male Athlete and Gene Day Outstanding Female Athlete Awards, are evidence of the Austin College emphasis on true scholar-athletes as they also were recognized as the Bo Miller Scholar Male and Female Athletes, the senior athletes with the highest overall grade average.

Cawthon Award winner Austin Light, a four-year letter winner and three-year starter on the Kangaroo football team, was one of the most decorated football players in recent Austin College history. A three-time All-SCAC performer, including a First Team All-Conference selection this year, Austin was named among the top offensive linemen in the nation as part of the Preseason D3 Senior Classic All-Star Watch List. He led the ’Roos as a team captain and served on the Student Athlete Advisory Council. Austin also participated in the National Division 3 All-Star Game.

Also successful off the field, Austin completed his degree in three and a half years while earning ESPN Academic All-District First Team honors this season. He also was one of 10 Texas college scholar-athletes recognized this spring at the third annual National Football Foundation Gridiron Club of Dallas banquet at Cowboys Stadium.

Austin plans to attend law school in fall 2012, and looking to his future said, “I aspire to never stop learning and to try and better myself by never letting opportunities pass me by. I strive to be an entrepreneur who is involved in many different aspects of my community. To quote The Departed, ’I don’t want to be a product of my environment; I want my environment to be a product of me.’”

Kaitlin Elledge, recipient of the Gene Day Award, was a four-year starter for the Austin College women’s soccer team. She finished her career as one of the top goalkeepers in the history of the Southern Collegiate Athletic Conference.

A three-time All-SCAC honoree, this season Kaitlin was named First Team All- SCAC after leading the conference by a wide margin, with only eight goals allowed, and attaining her career boast of a goals-against average of 0.78, the eighth best average in SCAC history. This season she had 10 shutouts, and also earned recognition as an ESPN Academic All-District and NSCAA Academic All-Region honoree.

Her thesis combined Spanish with her love of theatre, something she also pursued at Austin College, involved in a number of theatre productions, including acting as stage manager for the spring production of Ghost Light. She also was selected to membership in Alpha Psi Omega national honor society for students in drama.

Even with her busy sports schedule, Kaitlin managed to study internationally, spending a January Term in Brazil and Uruguay and a semester abroad in Seville, Spain, taking advantage of that opportunity to travel throughout Europe. She also completed internships in accounting at University of Texas Southwestern Medical Center and in investment management at Southwest Securities, as well as multiple summer internships as a production assistant and design intern at StageWorks.

Following graduation, Kaitlin set off to study in Spain for the summer. She plans to work for a few years, then pursue an MBA. She hopes eventually to become the CEO of a major corporation or own her own business.