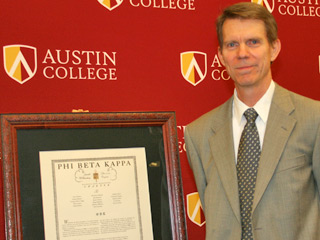 As the Austin College Phi Beta Kappa alumnus inductee for 2011, Bruce R. Ebanks ’72 also was the featured speaker, sharing parts of his journey and the words of Dr. Seuss from his book Oh, The Places You’ll Go.

Math took him many additional places, through visiting appointments and speaking engagements at universities of Waterloo in Canada, of Aarhus in Denmark, Milan in Italy, Graz in Austria, and Debrecen in Hungary, where he also was a Fulbright Scholar. His travels also took him to the Los Alamos Laboratory.

Ebanks has been widely published in professional journals and has been honored for his research and his teaching.