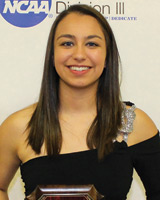 In fall 2011, freshman point guard Christina Kime ’15 was asked to take on a large leadership role when the women’s basketball team was hit with several injuries. She responded by turning in one of the best first-year performances of any player in the conference, leading the Kangaroos in scoring and assists. Christina, an Austin College Founders Scholar, also led the conference in minutes played.

That excellence of play and leadership earned her the Austin College Tim Jubela Outstanding Freshman Athlete Award at the annual athletics awards presentation in spring 2012. Now, her coach looks to see that excellence continue.

“Christina assumed a lot of responsibility on the court last season and performed wonderfully,” said women’s basketball coach Michelle Filander. “I look forward to watching her continued growth in the college game and to see her achieve a great and noteworthy career.”

Gifts to Athletic Enrichment help ensure the continued competitive experiences
for the 300 Austin College student athletes who represent ’Roo Nation every year.
Help them succeed by making a gift today!