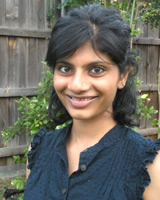 “While the mythology is important, we have new stories to tell, as well,” she said. “Why not tell the story of traffic moving through a city?”

In a video clip on YouTube, Ashwini and a team of dancers demonstrate the intense physical control of Bharatanatyam, an Indian dance form thought to be rooted in the technique of ancient temple dancers.

Although she has been dancing since childhood, Ashwini only came to professional dance recently.

While at Austin College, Ashwini majored in English and Spanish.

She continued her off-campus practice of Bharatanatyam and never considered majoring in dance. “I never felt I had to. It was a part of my life. (Dance) is just what a good south Indian girl ‘should do,’” she said.

Though she loves to read, choosing to major in language was a challenge because of her ethnicity.

“It’s a cliché to major in biology – it was a struggle to tell my parents ‘I’m not going to do that.’ Even saying ‘I can major in English’ was difficult,” she said.

Ashwini has struggled with her cultural identity her whole life; her family moved from India to Garland, Texas, when she was 7 years old. She grew up in a world divided: public American schooling and friendships balanced against traditional Indian expectations and family support.

“I never could place myself in one box,” she said.

Feeling neither wholly American nor Indian, Ashwini learned to straddle the two cultures.

Ashwini’s internal conflicts about the intercultural immigrant experience enriched her English research work her senior year, when she earned a Mellon Foundation grant on literature. Her work, titled, “Immigrant Experience Through Narratives of the Indian Diaspora,” analyzed the feelings immigrants had about themselves and the cultural assimilation they underwent.

Carol Daeley, professor of English and Ashwini’s research advisor, was impressed with Ashwini’s work. “She was coming to grips with all the questions that come out of colonization and immigration and having to define what it means to have those cultural threads,” Daeley said. “Working with Ashwini was unique in my long teaching career because she worked through literature and out of it to find what she wants to spend her life doing.”

Though Ashwini said she enjoyed working with Dr. Daeley, the hefty literary research showed her what graduate school would be like, and caused her to reevaluate her goals.

“I didn’t want to read about people doing things,” Ashwini said. “I wanted to do something.”

“I thought, ‘I’ll just go to India and dance!’” she said, laughing.

Ashwini’s long-time dance teacher spent her summers in India, and Ashwini decided to follow her for the time being.

“My parents made me come back,” she said. After her return, Ashwini worked for a magazine for six months, but the allure of dance remained.

“I remember I had to interview a dancer—and that was the day I decided to quit,” she said.

In 2007, she moved to India, where she danced and taught a creative movement class for children as young as three. She joined Shiri dance company, a group of classically trained Bharatanatyam dancers who fold in neotraditional elements and fluidity to their art.

“I think at some point I realized I wanted to do something more. I couldn’t be a pure classical dancer,” Ashwini said.

Ashwini turned her attention to a new goal: a Fulbright grant to earn a Master of Arts degree in movement studies.

Again drawing on her immigrant experiences, Ashwini’s proposal to create an arts collective to grow intercultural dance forms caught the attention of the Fulbright Scholarship Board, who awarded Ashwini one of the most competitive awards. She is spending the 2010-2011 academic year at the renowned University of London Central School of Speech and Dance.

“I want to create something where people can interact with other cultures. People can understand real things about others’ cultures,” she said. “Culture shapes these things, but under it, we are all just human.”

“It really seems that kids learn better when they learn with movements. I want to learn how the body moves in dance, theatre, etc.,” Ashwini said. “Those are both things I love to do: studio dance work and book-learning.”