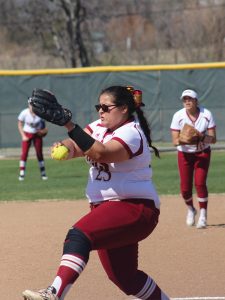 Kangaroo softball player Tori Herrera ’17 entered the 2017 season already holding Austin College records for most strikeouts in a season and in a career. This spring, she added to her career total and broke her own record for single-season strikeouts. She became the first Austin College softball player to surpass 400 career strikeouts, which places her sixth in Southern Collegiate Athletic Conference history in that statistical category. Kathleen Laster coaches the team.