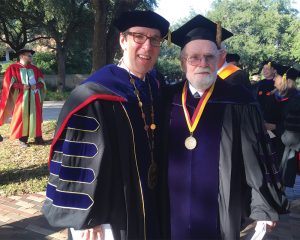 When Trinity University’s new president, Danny Anderson ’80, was inaugurated in February 2016, William Walker ’53 served as the Austin College representative at the ceremony. He has served in that role for inaugurations of Trinity’s previous two presidents—and represented Trinity at Austin College’s inauguration of President Marjorie Hass in 2009. Bill is the Jennie Farris Railey King Professor Emeritus of Religion at Trinity University, having taught religion at the university for more than 40 years. He has received many honors during his career, including the 2016 “Distinguished Service Award” from Austin Presbyterian Theological Seminary, where he received his M. Div. degree in 1957. He said the honor was equaled only by his Austin College Distinguished Alumni Award in 2009. Bill added to his long list of books with publication earlier in 2016 of Gospels, Jesus, and Christian Origins: Collected Essays by Polebridge Press. The book is a companion to his Paul and His Legacy: Collected Essays, released in 2015. 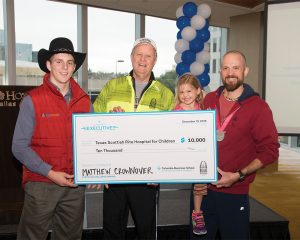 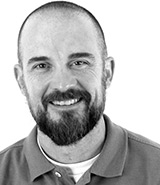 Matthew Crownover ’96 became president of Identification Plates, Inc., based in Mesquite, Texas, in January. He is the third generation to lead the family business that provides metals, fabrication, and imprinting processes. After earning his Austin College degree, Matthew earned a bilingual Master of Divinity degree at Southern Methodist University and volunteered, studied, and worked in more than 20 countries. During his 14-year career as a medical chaplain in Dallas-area hospitals, he received multiple certifications in the fields of oncology, psychiatry, emergency room, and neonatology. Matthew returned to his family’s business in September 2013 to re-integrate into the organization and graduated from the Goldman Sachs 10K Small Business program in 2015. Matthew said the company’s purpose in business is to bless the lives of customers, vendors, and employees. One such blessing came when Matthew ran in the Dallas Marathon in 2015. As the winner of Columbia Business School’s Executive Challenge, his run as the “fastest corporate executive” resulted in a $10,000 donation for the Texas Scottish Rite Hospital for Children on behalf of Identification Plates. “It was an honor to run through some pain for a few hours to provide this tremendous gift to the hospital,” Matthew said. Matthew is pictured with his daughter Lydia and representatives from Scottish Rite Hospital.