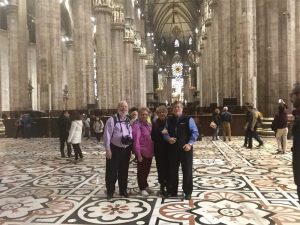 Alumni participating in the Global ’Roos tour of Switzerland and the Lake District of Northern Italy stopped for a photo inside the Duomo di Milano. Left to right, Bob Peterson ’72 & his wife, Pam, and Linda Whitworth-Reed ’73 and the Rev. David Reed ’74. They also happened upon a humorous sign across from the Schweizerhof Hotel in St. Moritz, Switzerland, that obviously had to be photographed by the ’Roo Nation alumni.

Sig Tau Reunion on the River of Knowledge 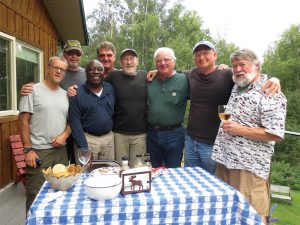 Summer fishing on Alaska’s wild rivers can be mighty appealing in deep winter, when the days are short, temperatures low, and the snow deep. That’s when the dream was born to unite eight Sigma Tau Epsilon alumni who graduated from Austin College between the Summer of Love and the Fall of Vietnam. Sig Taus Phillip Diehl ’73 and Greg Hill ’74 have sung with the Lone Tones, a noted Austin doo-wop group, since 1980. A Lone Tones performance at a recent Sigma Tau Epsilon Hill Country reunion brought them together with Jeff Harkinson ’70, Barry Johnston ’72, Darwin McKee ’73, Ashley Winn ’73, Dave Pernell ’75, and Preston Conrad ’75.

This group traveled from homes in California, Indiana, Washington, and Texas to meet at Greg’s house in the primeval forest outside Fairbanks in July 2015, during the height of Alaska’s glorious summer and fishing season. After the first of several sumptuous fresh salmon dinners at Casa Hill, the group journeyed to Skinny Dick’s, an Alaskan roadhouse halfway between Fairbanks and the Nenana River, to refresh and reminisce. A fishing guide met the group for the jet boat trip to a cabin situated on a small tributary teeming with Arctic grayling, who soon learned to fear the approach of seasoned Sig Tau anglers.

Next came visiting Denali (aka Mt. McKinley) in the Alaska Range, the tallest mountain in North America, and the powerful freight-pulling sled dogs used by the Parks Service in winter in lieu of motorized vehicles. Then on to raft the mighty Klutina River, near the Wrangell Mountains, which has Class III rapids and contains king salmon weighing up to 60 pounds and more.

The rapids were conquered, and large salmon were caught, smoked, and frozen for shipping south. Fortunately the travel party included a biochemist and glaciologist to elucidate the magnificent geography. Grizzlies, beavers, moose, eagles, and caribou were observed in the wild. Museums, muskox, the Trans- Alaska pipeline, and a surprising number of Eastern European visitors also were spotted. The anglers’ liberal arts education was utilized throughout the trip as robust discussion and debate led to creative solutions for most of the world’s pressing issues. And suitable jewelry was purchased for the women wise enough to wed Sig Taus, whom the fish fear and whose fellowship apparently cannot be conquered by time. 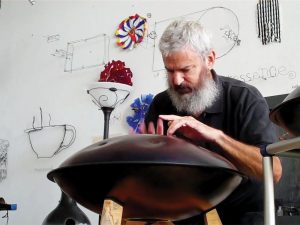 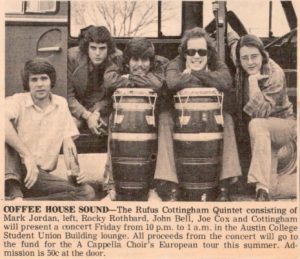 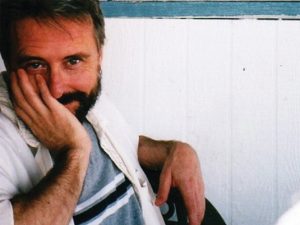 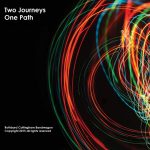 Robert Rothbard ’78 and Wade Cottingham ’77, as Rothbard Cottingham Bandwagon, released their first album, Two Journeys One Path, in July 2015 on iTunes, Spotify, cdbaby, and bandcamp. Rothbard played handpans and percussion, and Cottingham supplied keyboard, percussion, effects, and vocals. They managed this with 600 miles between them, Wade in Texas and Robert in Missouri. Never in the same place, they sent tracks and comments back and forth for over three months to complete the project.

Wade teaches piano and keyboards percussion at Lakewood Piano Lab and Robert is a staff writer at Barnfinds.com. The two had not seen nor spoken to each other since the 1970s when they graduated from Austin College. Then, in 2010, Robert began shooting art shorts and emailed Wade to ask if he would be interested in producing audio tracks for him. That went well. The next project, Rothbard Cottingham Bandwagon, came from that interaction. 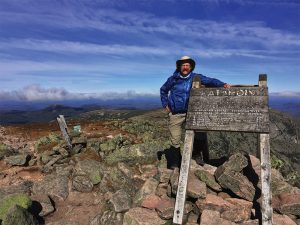 Fourteen states, 2,189.2 miles. Roughly 5 million steps. Up and down mountains to the equivalent of 16 ascents of Mt. Everest. Snow, ice, rain, sticky mud, miles of ankle-twisting and foot-bruising rocks, lightning, fog, blazing heat, sunburn, drought, Lyme disease, norovirus, ravenous mosquitoes, biting flies, mice running across his sleeping bag and burrowing into his pack, rattlesnakes blocking the footpath, moose blocking roads, and bears trying to “yogi” his food. All while carrying a 25- to 40-pound backpack and walking up to 22 miles per day. Sleeping in a tent, one of the 256 shelters built by volunteers, or the occasional hostel or hotel, and going into nearby towns about every five days for resupply and a hot shower.

These were some of the challenges faced by Bryan McCullough ’84 while hiking the Appalachian National Scenic Trail this year. Starting in mid-March at Springer Mountain, near Amicolola Falls State Park, Georgia, he finished his thru-hike on the peak of Mount Katahdin in Baxter State Park in Maine on October 8, 2015. During the hike, he walked through Great Smoky Mountains National Park, Shenandoah National Park, Harpers Ferry and the C&O Canal National Historical Parks, and the Delaware Water Gap National Recreational Area, as well as eight national forests. 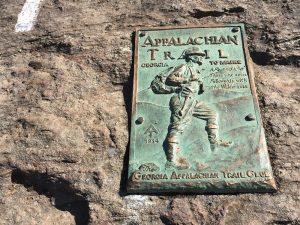 The Appalachian Trail was conceived by Benton Mackay in 1921 and finally finished by Myron Avery in 1937. It was to be a place where Eastern city people could go to get back to nature, escaping the bustle and stress of everyday life. In 1948, Earl Schaffer, a WWII veteran newly discharged from the service, finished the first thru-hike. At the time, there were no guidebooks about the trail. In 1955, Emma Gatewood became the first woman to thru-hike the Trail. The youngest successful thru-hiker was only 5 years old when he finished in 2013. Today, there are guidebooks detailing every mile of the trail and the towns nearby; numerous books have been written about it and how to prepare for it, inspirational movies have been filmed about thru-hikers and their journeys. Each spring, about 2,500 people attempt a thru-hike but only about one in four are successful.

Those that visit the Trail take home pictures and memories of expansive vistas, wildlife (those bears, as well as deer, grouse, owls, and loons), the relaxing and healing feeling of wilderness solitude, and the friendships made with other campers and hikers. The film, A Walk in the Woods, takes place on the trail.

Living A Passion for Art, Design, and Technology 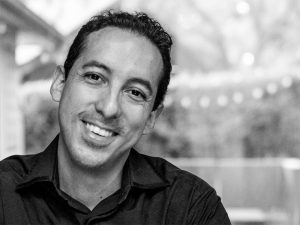 Chris Perez ’02 is the video producer for “Our Desired Future,” a multimedia project to educate Texans on the interconnections between water above and below ground. Our Desired Future is a project of the Texas Center for Policy Studies, and was made possible with a grant from the Shileld-Ayres Foundation. Chris is the founder and CEO of Left Right Media and Citygram Austin Magazine. Left Right Media is a digital publishing and design agency that specializes in designing interactive tablet and smartphone apps using Adobe software. The agency is a design partner of Adobe, and works closely with them to develop concepts and solutions with their publishing software for clients all over the country. Left Right Media started with Citygram, Chris’ vision for a digital lifestyle magazine in Austin. It covers the heartbeat of the city—the creative energy of artists and makers, along with the eclectic restaurant scene and innovative tech community. Chris started the magazine from the ground up, curating the writers, taking the photos, editing, designing the issues for the app, marketing, and even throwing events.

Chris earned a master’s degree in electrical engineering from the University of Michigan, Ann Arbor, and worked for nine years as an engineer with IBM, where he was the lead inventor for three U.S. patents and received many accolades for his accomplishments. According to Chris, he now lives the fairy tale most people envy: he does what he loves. His business partner wrote: “His passion for art, design, and technology drive him, and his talent carries him. It’s also contagious, and great for his team. Because we work in an industry that is always evolving and targets a younger, tech-savvy generation, we hire young designers. To them, Chris is a mentor, a teacher and a leader. His way of exposing potential and confidence in everyone he works with is something very special.”