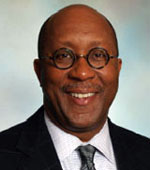 Ron Kirk ’76 has been selected to receive the prestigious University of Texas Presidential Citation for 2010. The recognition was created in 1979 to recognize the extraordinary contributions of individuals who personify the university’s commitment to transforming lives.

As United States trade representative, Kirk is a member of President Barack Obama’s Cabinet and is the president’s principal trade advisor, negotiator, and spokesperson on trade issues.

Prior to becoming U.S. trade representative in 2009, Kirk was a partner at Vinson & Elkins. He served as mayor of Dallas from 1995 to 2001, and previously had been appointed Texas secretary of state by Governor Ann Richards. His career also included service as a legislative aide to U.S. Sen. Lloyd Bentsen, chair of Texas’ General Service Commission, and City of Dallas assistant city attorney.

Kirk was named one of “The 50 Most Influential Minority Lawyers in America” by the National Law Journal in 2008, and one of the nation’s top government relations lawyers by The Best Lawyers in America from 2007-2009. He also received the University of Texas Distinguished Alumni Award in 2001, the Woodrow Wilson Center for Public Policy’s Outstanding Public Service Award in 2000, the Young Texas Exes Award in 1995, and the Austin College Distinguished Alumni Award in 1994. Kirk received an honorary Doctor of Humane Letters Degree from Austin College in 2006 and the Mickey Leland Leadership Award from Texas Southern University in 2004. He also is a senior member of the Austin College Board of Trustees.

Kirk earned his law degree from The University of Texas at Austin School of Law in 1979.