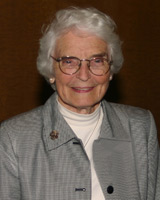 A Lifetime of Dedication

The Austin College community lost a treasured and much-beloved friend with the death of Sara Bernice Moseley, 95, on July 18. Her contributions to the life of the College and to thousands of alumni, faculty, staff, and friends truly are beyond measure.

For a quarter of a century, 1953 to 1978, Mrs. Moseley served as first lady of Austin College while her husband John D. Moseley served as one of the most successful and forward-thinking leaders in the College’s history. Upon his retirement as president in 1978, he spent three years as chancellor, at which time the Moseleys built a home on Grand Avenue, remaining just across the street from the College. Until President Moseley’s death in March 2009, the two were honored participants at nearly every major activity at the College.

Since then, Mrs. Moseley continued to represent the family on campus—through the arrival of the College’s first woman president in July 2009, and beyond.

“First, as the wife of the president, then as the partner of the president emeritus, and finally as the widowed grand dame of Grand Avenue, Sara Bernice served as the College’s ambassador, its memory, and a symbol of its values,” Austin College President Marjorie Hass said at the memorial service for Mrs. Moseley. “She helped welcome me to the Austin College family and was a great friend and advisor to me. Her warmth, graciousness, and visible enthusiasm for all things Austin College have made a deep and enduring impact.”

Mrs. Moseley’s home on Grand Avenue gave her a daily view of Austin College life, and her interest in its students and their activities never waned. She watched with excitement as construction changed the face of the campus just outside her front door—from the Sandra J. Williams Founders Plaza to the Forster Art Studio Complex to the cottages of the Village on Grand that brought her much delight and many new student neighbors. This May, she attended her 60th Commencement exercises, as proud of the graduates today as she was when her husband presented the graduates’ diplomas.

After she was elected moderator in 1978, The Presbyterian Outlook quoted Mrs. Moseley’s two “profound hopes” for the Presbyterian Church: that “God will equip His people in effective ways to live out their faith,” and that “with the integrity of the Presbyterian system, we will keep the church open to the leadership of the Holy Spirit.”

Born Sara Bernice Honea, Mrs. Moseley served as vice president of the Synod of Texas Youth Council in 1935. (The president that year was a young John D. Moseley.) She graduated from Texas State College for Women (now Texas Woman’s University) in 1937 with a B.A. in music and completed further study at the University of Michigan and the University of Texas. She married John D. Moseley in 1941. She was 34 years old when the couple moved to Sherman in 1953 when John D. became the 12th president of Austin College. 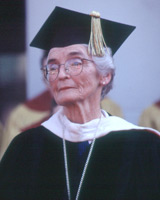 The Austin College Board of Trustees approved the establishment of the Sara Bernice Moseley Scholarships for Outstanding Presbyterian Students in 1995, recognizing Mrs. Moseley’s contributions to the church and the College. In 2002, the Moseleys’ nearly 50 years of service to the College were recognized with the dedication of the College Green in Honor of John D. and Sara Bernice Moseley and Distinguished Faculty. In 2012, the Board of Trustees approved the naming of the John D. and Sara Bernice Moseley Covenant Society, which recognizes individuals who have included Austin College in their estate planning. Additionally, she was named an honorary inductee to the prestigious Phi Beta Kappa Society honorary in 2012 by the Austin College Iota of Texas chapter. She also was honored by Austin College’s Texoma Women Get Connected group with a scholarship in her name for local students.

For those who had the privilege to know Mrs. Moseley, no amount of recognition and honor are sufficient to memorialize the graciousness, devotion, and warmth of the quintessential First Lady of Austin College. She will be greatly missed.