I grew up mostly in Richardson, Texas and attended public school there. My family moved there in 1954, when I was eight. Central Expressway (U.S. 75 north from Dallas) had just opened; Richardson had a population of about 4,000; and Plano was scarcely more than a dot on the map. Can you imagine?

My music training began in 5th grade, when I started on the cornet. I switched to the horn in 10th grade. My only orchestral experience during my high school years was as a substitute (twice) in the community orchestra then functioning in Richardson, drawing personnel from surrounding communities.

I have two vivid memories from those occasions. On one of them we did the William Tell Overture, and it was my first exposure to un-transposed, 19th-century horn parts. Transposition soon becomes second nature for an orchestral horn player, but for a high school band kid who has never seen anything but F horn parts, it’s a daunting experience. On the other occasion we did the 1812 Overture. To simulate the cannon fire that traditionally punctuates the finale of the work, we had a guy firing blanks from an old hog-leg .44 revolver into a metal barrel with both ends cut out (a true Texas sound effect!). This contraption was set up just a few feet behind the horn section. The first time it went off I jumped half way to McKinney! 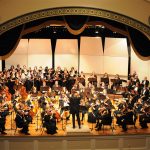 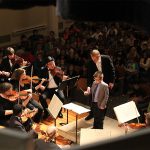 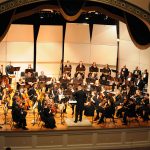 Notwithstanding the transposition trauma and “cannon fire,” I loved the experience and hoped that I would have more opportunity for orchestra playing while at Austin College. I was overjoyed when during my sophomore year Cecil Isaac began talking about the plans for the new Sherman Civic Orchestra, to begin rehearsals in the fall of 1966. We rehearsed in the old music building, and our performances were in Wynne Chapel.

The program from our inaugural concert in December 1966 reflects our small size starting out, basically a chamber orchestra, and Cecil’s selections of lightly scored music to match. Contrast that program with the one from our performance in November 1967. We had grown considerably in numbers that first year and could perform works for full orchestra, including full wind voicing. I enjoyed particularly playing the Weber, with its famous horn quartet.

I’m sorry that I can’t still remember the names of all of my fellow A.C. students who played in the orchestra those first two years; it’s been too long. Those listed in the programs whom I remember are Mary Gwen Chapin, Marilee Munger, Richard Johnson, Jim MacKay, James Johnson, Layne Atteberry, David Dowty and Dale Eichenberger. Most of them were members of the college brass or woodwind ensembles, as was I. 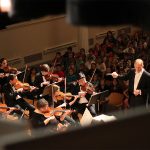 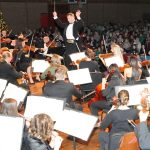 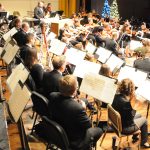 My chief regret on leaving Austin College and Sherman in 1968 was my departure from the orchestra. That fall I enrolled in Vanderbilt School of Law and although I had hoped to continue playing the horn regularly, it didn’t work out that way for a while. What happened instead was the rigors of law school; the bar exam and licensure (in Tennessee); courtship and marriage to my wonderful wife, Sara; six children whose current ages are 27 through 41, plus six grandchildren and counting. Having come to Nashville for law school in 1968, I never left. My legal career has been devoted entirely to helping low- income and elderly residents of Middle Tennessee, through the non-profit entity now known as Legal Aid Society of Middle Tennessee and the Cumberlands. In addition, since 1986, I have been a member of the affiliate faculty at Vanderbilt School of Law, where I teach a course on consumer protection.

After a few years in Nashville I began playing in ensembles with other brass players I had hooked up with. In 1991, Dr. Tim Cierpke, a professor on the music faculty at Trevecca Nazarene University, was organizing an orchestra to be affiliated with the school. Someone gave him my name as a prospect, and he invited me to audition. I did so, and to my delight he offered me a spot in the horn section. Our concert coming up in April will mark the completion of my 25th year with the Trevecca Symphony Orchestra. I wouldn’t have missed it for the world, and I hope to continue for a few more years. Back In 1968, shortly before graduation, Cecil Isaac told me that I should keep on playing. He was so right.