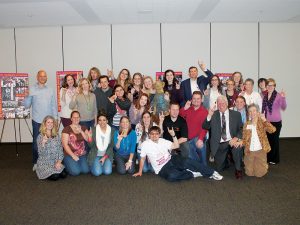 A Legacy of Leadership

A large number of current and former participants in ACtivator programs gathered to celebrate 20 years of outreach. Many of the alumni who participated in the program as students now work in church ministry in one form or another. 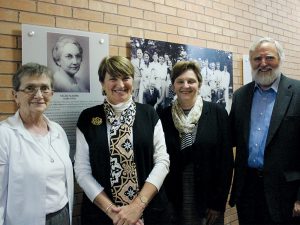 Austin College hosted Dr. Heath K. Rada, moderator of the 221st General Assembly of the Presbyterian Church (USA) in November 2015. Among other events and interactions with several alumni, students, faculty, and staff during his two-day stay, he took part in a luncheon celebrating the 20th year of the ACtivators youth ministry team and met with a group of alumni who have completed the Presbyterian Church’s Young Adult Volunteer program.

Dr. Rada also joined several guests for the installation in Wynne Chapel of a display honoring Presbyterian pioneers who also had significant roles in Austin College history. ”The vision, courage, creativity, and leadership of Sallie Majors and Sara Bernice Moseley have greatly influenced religious life at Austin College and in the life of the Presbyterian Church (USA),” the display text reads.

A leader in Presbyterian Christian education and youth ministry throughout Texas, Sallie Majors continued her ministry in Richmond, Virginia, training educators for the church. “One of my favorite PSCE stories is that this remarkable woman assisted President Charles Kraemer when the Poor People’s March came through Richmond, on their way to D.C. where Dr. Martin Luther King would make his ‘I Have a Dream Speech.’ Dr. Kraemer had been the only person in Richmond who opened up space where these hundreds of people could pitch their tents and spend the night. They were not welcome in city parks or on other campuses. But Sallie knew that was wrong, and she worked right beside Dr. Kraemer in welcoming and assisting the throngs who descended on the campus.” 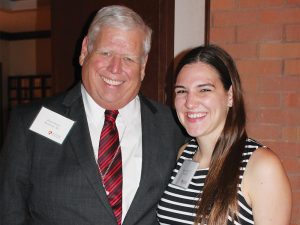 Of Sara Bernice Moseley, First Lady of Austin College under the leadership of Dr. John D. Moseley (1953-1978), Dr. Rada had words of thanksgiving. “If Presbyterians were to identify and elevate persons to ‘sainthood,’” he said, “Sara B. would be among this great host of faithful, loving, devoted, and dedicated persons. To know her was to love her, for her grace and gentle spirit, and to give thanks for her leadership, not only alongside her husband who was president of this wonderful college, but also throughout the PCUS and the PCUSA. She was the first woman elder in her Presbyterian church in Sherman, the first woman to be moderator of our denomination, and the first chairperson of the General Assembly Council of the reunited PCUSA.”

Austin College awarded Majors an honorary Doctor of Humane Letters degree in 1954. In 1999, the College established the Sallie Majors Internships through which selected seniors work with the College chaplain to lead the Religious Life program. The internship program was funded by Robert M. Johnson ’53, the great-nephew of Majors. Johnson, now a senior member of the College Board of Trustees, joined the board in 1993 and served as chair of the board from 2007 to 2012.

The Austin College Board of Trustees established the Sara Bernice Moseley Scholars Program for Outstanding Presbyterian Students in 1995 to honor her many accomplishments. She also received an honorary Doctor of Humane Letters degree from Austin College in 1978.

The display text reveals that both Sara Bernice and John D. Moseley were mentored by Sallie Majors, who introduced them in 1935 and even helped plan their wedding.