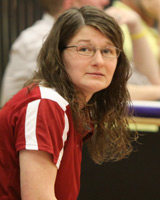 Long before she ever stepped onto the sidelines as a graduate assistant at Austin College, Bobbi Schulle ’10 knew she wanted to be a coach. She took a step toward that goal this year, but in an unlikely setting for most young women looking to lead sports programs. That’s because Schulle became one of the rare women to join the coaching staff of a men’s athletics team, working under head coach Rodney Wecker with the Kangaroo men’s basketball team.

A woman coaching a men’s sport is a sight rarely seen even in the modern sports world, with the most notable exception of former women’s basketball great Nancy Lieberman, currently coaching the Texas Legends, the NBA D-League team of the Dallas Mavericks that plays its games in Frisco. With so few women having coached men, Bobbi knew there would be challenges, but her anxiety about those challenges quickly subsided. 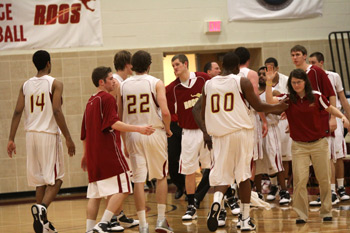 “I was nervous initially about being taken seriously and even being respected by the guys,” said Schulle, “but from day one that was never a problem. We all meshed and got along and they treated me like one of them. I couldn’t have asked for a better group to work with.”

The respect and trust that developed helped her become a very important component of the team, which reached the Southern Collegiate Athletic Conference Tournament for the fourth straight season.

“While initially it might have seemed strange hearing constructive criticism on the court from a female, they respected my presence and trusted that I would not waste their time with pointless information and from that our coach-player relationship took off.”

Of course, there were some obvious obstacles to fully immersing herself with the guys, namely the pre- and post-game meetings in the locker room. While the men adjusted their routines to accommodate the best that they could, it still proved to be a bit of a tough situation from time to time for the coaching assistant.

“The hardest part for me was probably after a big win or that tough conference tournament loss, having to miss out on being in there with the guys and not getting to share those experiences with them.”

Bobbi gained a great deal from her experience this season, and she credits much of that to Coach Wecker, who taught her valuable lessons relating to basketball as well as life.

“I learned that every day presents a challenge, and it is up to you to take advantage of that opportunity to learn something,” Bobbi said. “If you’re not careful, you regress and the game passes you by. The tools Coach Wecker gave me have helped me really to form my own blueprint of what it takes to succeed in coaching at any level.”

Since helping to instruct some young girls at her little sister’s softball tryout when Bobbi was just a freshman in high school, she’s been preparing herself to coach at whatever level an opportunity presents itself. The passion of coaching was just too great to resist.

“I was never able to sit back and watch a game without wanting to be out there helping and trying to make somebody better,” Bobbi said of her first real coaching experience at that softball tryout. “My ultimate goal is to be a part of building a successful program with high character student-athletes. Whether with a college, a high school, or a club team, the emphasis always will be on the kids and finding ways to make them better and grow as individuals on and off the playing field.”

Bobbi, who will receive her Master of Arts in Teaching degree from Austin College this May, will continue coaching this summer with a club softball team. While she’ll soon begin the process of job hunting, she has no plans to stop working with teams and will continue to network with other coaches in the hope a position with a college or high school team presents itself. And, the idea of working with another men’s team is an option.

“If the opportunity presented itself, I would not hesitate to work with a men’s team again. “So much of the game relies on understanding fundamentals and having a mental edge over your opponent, so I would feel very comfortable working with a men’s team and being a positive presence.”

Bobbi isn’t limiting her options to any particular sport, either. In fact, she would some day like to try her hand at coaching football, though she realizes that her lack of playing experience in the sport would make landing a job on the gridiron a difficult endeavor. That doesn’t rule the possibility out, however.

“I can see myself starting out with a junior high team and working hard to earn the trust of the coaching staff and move up from there,” Bobbi said. “Coaching any sport is a challenge and takes the willingness to learn year after year in order to ensure that you are giving your team the best shot at success. I am not afraid to put that work in regardless of whatever sport I am given the opportunity to coach.”