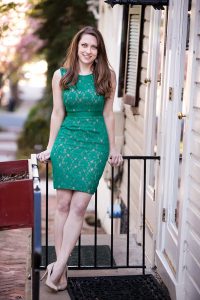 Kristin Saboe ’07 chose combat boots over the corner office because she has a great respect for timing. With “dream-job” offers in front of her after completing her Ph.D., she says she had a gut feeling that the offers weren’t the right fit at that time in her life. She notes that her career decisions always include her larger goal to do something that changes the world and makes people’s lives better. Having done work with the U.S. Army in her Ph.D. research, Kristin knew that serving in the Army as a research psychologist would allow her to affect and change people’s lives for the better. “I knew if I was going to go into the military, that was the time due to the age cap,” Kristin said. “I can pursue the other opportunities later.”

After she completed her doctorate in industrial and organizational psychology from the University of South Florida, Kristin joined the Army as a Captain in 2012. She spent her first three years in the Army at the Walter Reed Army Institute for Research (WRAIR) where she worked with and on behalf of soldiers and their families conducting and publishing research and advising senior Army leaders. In that role, she deployed to Afghanistan in summer 2013 as the lead analyst of a hand-picked team evaluating the mental health and leadership of American soldiers in combat. Upon her return, she briefed the Commander of the U.S. and Joint Forces in Afghanistan with the results of the study and her recommendations. 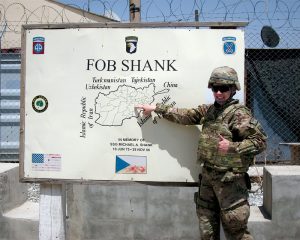 Kristin is now stationed at the Pentagon as the Acting Branch Chief for Science and Research Integration at the Army Resiliency Directorate within the Office of the Deputy Chief of Staff of the Army. She manages and directs research and policy efforts promoting positive psychological growth, resilience, and risk-reduction in soldiers through training, self-assessment, and self-development. Dr. Les McFarling, the Senior Advisor for the Army Resiliency Directorate, offered a recommendation for Kristin for Austin College’s First Decade Award, including, “The position she holds is slated for a much more senior officer. Kristin was selected based on her performance at WRAIR and her potential. Working with senior Army leaders, Kristin quickly sized up the situation and developed a plan to the fix the faults of the ArmyFit program (an Army-wide effort promoting personal growth and well-being which has been adopted by militaries and organizations worldwide). She established her credentials with officers much her senior in several different Army organizations.”

Kristin has received a variety of military and professional awards and recognition—such as several significant Army achievement awards and being a featured expert during Congressional Testimony, for senior level executives, and before a variety of national media outlets. Beyond her military service, Kristin is also nationally recognized for her volunteer and leadership efforts with veteran employment.

“Being in uniform has enabled me not only to be at the decision-making table with regard to significant life-changing issues for millions but also to broaden my perspective, understanding, and appreciation for the depths of human experience, all while enjoying a successful and engaging career as an industrial organizational psychologist,” Kristin said.

At home, Kristin and her husband, Michael Webb, welcomed their first child, Grant, just a few weeks after their campus visit for Homecoming. Mike is a professional musician, and Kristin’s favorite hobby is being his number one fan. As for the future of her career, Kristin says she knows she has choices and will continue to draw on many of the skills she learned as a student at Austin College.

“While I was at Austin College I got a really good idea about what the right fit feels like, and knowing that is very important,” she said. “Austin College set me up to understand that about myself.”