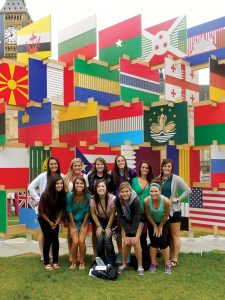 The Austin College women’s soccer team enjoyed a 10-day trip “across the pond” this summer to take on some competition and soak up some Olympic spirit. Of course, they were mistaken as members of the Australian national team a time or two in London-Heathrow airport—and admit they, in their jet lagged state, may have agreed to that identity!

The women did make their way to the Olympic soccer venue, but as spectators, able to get tickets for two matches at Coventry and one at Wembley Stadium. The players found the Olympic talent amazing as they first took in the Japan/Sweden match, where they joined in chants they didn’t understand with the fans around them, but the language barrier didn’t lessen their enjoyment of the game or the camaraderie.

Before that, however, they had competition of their own, taking on two British amateur teams—the Coventry Ladies in Birmingham and the Peterborough Ladies in Peterborough, England. (Peterborough happens to be the hometown of coach Paul Burns, who has led the ’Roos women’s soccer team since its varsity beginnings in 1996.)