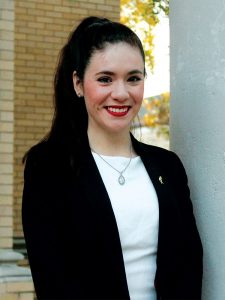 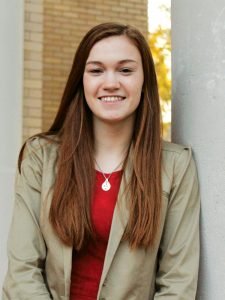 Austin College celebrates its 100th year of co-education as two women lead the Austin College student body. Clarissa Caballero Pinedo ’19, voted student body president last fall, and vice president Laurel Hagge ’19 began their Student Assembly roles in January. Both officers have expressed a goal to increase student involvement. “The sense of community here is why I am a part of  ’RooNation,” Clarissa said, explaining that the small campus has allowed her to make many meaningful connections, and now she wants to inspire others to pursue goals as a community.

Clarissa is completing a major in psychology with minors in education and Spanish. A three-year member of Student Assembly, she also is involved in the Catholic Student Association; works as a  resident assistant; is a Students Today, Alumni Tomorrow ambassador; serves as an Admission tour guide; and interns in the Office of Public Affairs. She plans to become a bilingual educator and  advocate for minorities to further their education.

Completing majors in chemistry and public health, Laurel has served as a member of Student Assembly for three years and is a member of the KangaRAAS Indian dance team, THINK environmental group, and Alpha Phi Omega national service fraternity. “I encourage all students to voice their opinions about our campus and see the difference they can make,” Laurel said. She has discovered a passion for research at Austin College and hopes to attend graduate school to further that interest.