Golden ’Roos from years past and Class of 1961 alumni, joined by President Marjorie Hass and Larry Hass, stopped reminiscing long enough for a photo. Though they didn’t move into perfectly defined rows (a rowdy bunch!), this identification should allow fellow alumni to identify those gathered. Names with no year are members of the Class of 1961. 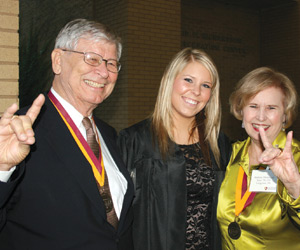 The Class of 1961 graduated 50 years ago this May and 28 members of the class gathered for a weekend of celebration and their induction to the Golden ’Roos during Commencement 2011.

Several who already had achieved Golden ’Roo status joined them for the fun.