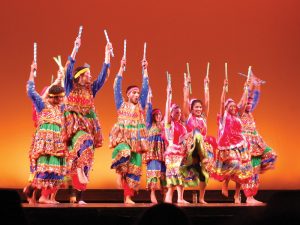 During the 2012-2013 academic year, the Austin College competitive Indian Garba/Dandiya Raas dance team, KangaRAAS, participated in its inaugural competition. During 2013-2014, the team moved up to its first national competition, joining teams like UT-Austin, Texas A&M, and Michigan State on the stage. Just getting there was a milestone—an audition video was required. Once accepted, practices accelerated to perfect the intricate dance moves. The team practiced 3 hours a day during the week and 5 hours per day on weekends, with a few 8-hour practices thrown in, all toward the team of 14 perfecting the 7-minute routine for the competition.

Hard work, but definitely worth it, said team captains and Class of 2014 graduates Sathya Kikkeri, Surya Ravi, and Meghana Bellary. The dancers traveled to the Dallas event in “competition mode,” expecting fierce rivalry, but were pleasantly surprised to find the other teams friendly and helpful. And, KangaRAAS were thrilled to be among others who love the dance as much they do.

The captains said they discovered a new aspect of school spirit through the dance team. “We are proud to let people know who we are, and now people who knew nothing of Austin College know all about us,” Meghana said. “Through KangaRAAS, we’ve succeeded in putting Austin College on the map in a new way.”