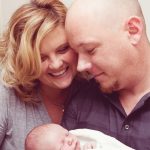 Brianna Burnett and Shaun Foreman welcomed Graeme Alexander to their family October 17, 2014. Brianna is a professor at the Art Institute of Pittsburgh Online, teaching photography, and Shaun is a graduate student in Mechanical Engineering at Texas Tech University. 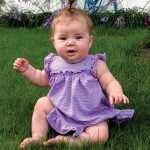 Ben and Amanda Hollander Newport welcomed Madison Jean to their family July 20, 2014. Mandy moved to New Zealand in 2011. The couple married in Fort Worth, Texas, on October 19, 2012, and the family lives in Napier, New Zealand, where Mandy is an independent beauty consultant for Mary Kay New Zealand. 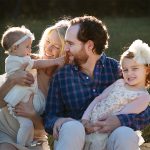 James Quick and his wife, Mandy, announce the birth of their second daughter, Palmer, in January 2014. Big sister Campbell, 3, welcomed her home. The family moved this spring from Dallas, Texas, to Little Rock, Arkansas, where James continues to work as senior vice president for Academic Partnerships. He has been with the company for the past eight years. 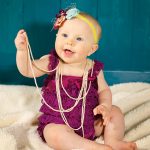 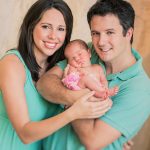 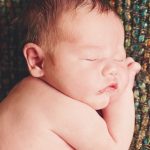 Justin and Melissa Johnston McKenzie, announce the arrival of Mason Michael on February 27, 2015. The happy family lives in San Antonio, Texas. Melissa is the region campaign director for The Leukemia & Lymphoma Society, and Justin is the region implementation project manager for Aerotek Staffing. Michael Johnston ’01 (MAT ’02) is a proud uncle of the new family addition. 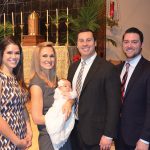 Meghan and Matt Ellington announce the birth of Brynn Elizabeth on November 23, 2014. The family lives in Temple, Texas, where Matt is finishing his residency in orthopedic surgery at Scott and White. Godparents are Karen and Taylor Adams ’08. Pictured are godmother Karen Adams, mom Meghan with the baby, dad Matt, and godfather Taylor. 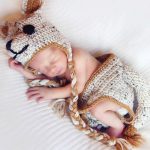 Jonathan and Carrie Tibbals Rios welcomed the arrival of their son, William Glen, on October 15, 2014. The family lives in Lucas, Texas. (Carrie found the ’Roo outfit on Etsy.) 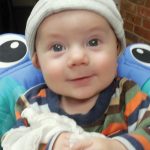 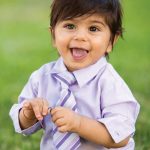 Shivum and Danielle Clements Agarwal announce the birth of their son, Krishan Yogi, on January 29, 2014. 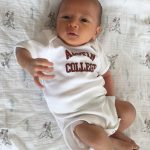 Mio and Will Radke announce the March 12 birth of Matteo Frederick Komatsu Radke (ラドキ 万天旺, which represented his Japanese and Italian heritages) in Tokyo, Japan. In Japan, parents choose a first name that represents their aspiration for the child. Matteo means to prosper or flourish in the world. Will and Mio aspire for him to do well in the world and be a global citizen. In Japan, nicknames also are important; usually adding “kun” to the end of male names. The baby is called “Teokun.” His full English name (no middle names are allowed in Japan) celebrates his background: Matteo represents his mother’s Japanese heritage and Will’s Italian roots. Frederick includes Will’s German heritage and a historical family name; Komatsu is Mio’s family name. Mio is a former Austin College Jordan Language House native speaker.