January Term is special. Taking only one course provides a change of pace, a chance to study a subject outside students’ regular academic interests or to delve deep into one topic. The term also allows students to explore career options at sites they arrange—in Sherman, their hometowns, or around the globe. 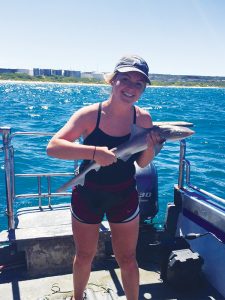 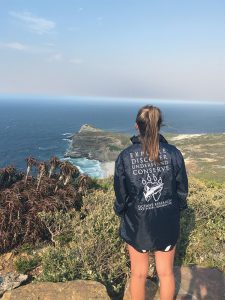 Lola Alexander ’17 took part in a Career Study Off Campus (CSOC) in marine ecology, traveling to Oceans Research in Mossel Bay, South Africa, to collect data about sharks, dolphins, and whales at sea. “This JanTerm opened my eyes to a new culture and new things,” she said, adding that she found positive and negative aspects to such a career. “Meanwhile I met people that I will be friends with for life and had an amazing time. This is by far the best experience I have ever had.” 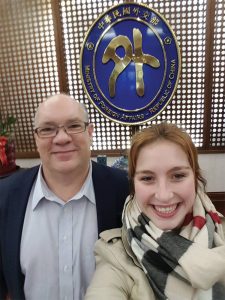 Don Rodgers and Lindsey Womack pose during a January class visit to the Republic of China Ministry of Foreign Affairs.

The opportunity to include travel in coursework is part of the magic of JanTerm. Don Rodgers, associate professor of political science, could have selected from several books to provide background and history and used real-time online updates to teach his course, “Taiwan’s 2016 Elections.”

“Taiwan has a vibrant election process with exciting and entertaining campaign rallies, festivals, and parades,” Rodgers said. “The 2016 election was particularly exciting because of the emergence of a strong social protest movement led primarily by college students that definitely influenced the process.”

Allowing students to be in Taiwan in the midst of the January presidential election gave them insight and exposure that even up-to-the-minute online video never could. “Taiwan will always hold a special place in my heart; I feel inspired by the people I met, and am now friends with, to engage in my community in the way that they have,” said Lindsey Womack ’16, one of 13 students in the class.” I met students and activists who have fundamentally changed their country through their actions of peaceful protests and by the sheer fact that so many of them cared so deeply about what was going on in their country. I could have never learned any of that or have been so affected if the class had stayed on campus.” 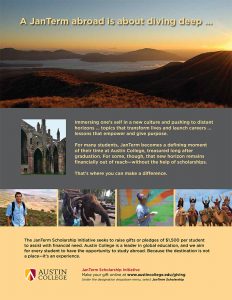 On-campus courses included study of all sorts of topics, like drawing comics, the economics of poverty, exercise and nutrition, math and strategy, Dostoevsky, and prohibition, as only a few examples. And, the Service Station hosted its annual JanServe during which students volunteer through Special Olympics and after-school programs.

JanTerm courses have been making magic since 1968. New career directions, lifelong friendships, and even some marriages had their beginnings in JanTerm experiences. JanTerm celebrates its 50th year in 2018; to share your own life-changing moments, write editor@austincollege.edu.