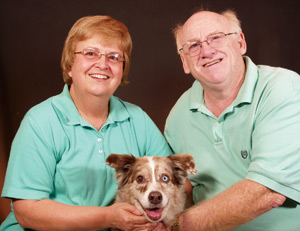 Professor of biology Peggy Redshaw came to Austin College in 1979 with a specialty in genetics, particularly the genetics of Streptomyces. Now in the second year of a four-year phased retirement plan, she shares answers to a handful of questions about her students, her profession, and her experiences.

How did you choose your career path?

I think my career chose me. When I started my undergraduate education, I was the only female taking calculus. There was not a real support system, no women mentors or female role models, but I like to learn and really flourished in college. Biology was something I really connected with. After a couple years, I began to talk to the biology faculty about a career in college teaching. I enrolled in a graduate program that required a broad set of courses as well as bench research.

How did you begin your career at Austin College?

I was teaching in a tenure-track position at a small women’s college, Wilson College, in Pennsylvania. The president closed the college in spring 1979; a one-year position was advertised here. By August, I had moved to Sherman and Wilson had reopened following a lawsuit (and remains open today). So, I had two teaching jobs. I made the decision to stay here. Over the years, I’ve worked with extremely supportive colleagues; I was able to teach the courses here I wanted to teach. Initially, I was the only woman on the biology faculty. I’ve been able to move in the last decade from biology major courses to more interdisciplinary classes, which I’ve really enjoyed. Now that I’m phasing down to retirement, I still enjoy the day-to-day work with my students.

What has changed about science education during your career?

I was taught science in college and graduate school through lecture and it was assumed that everyone learned that way. We now realize that students learn in different ways. Today, science education has moved away from “the sage on the stage.” I do very little lecturing now, but serve as a guide to the course material.

In my non-majors classes, I want to make the courses very current, addressing topics in the news right now. This fall, we’ve been discussing the global eradication of polio, and we spend part of each week discussing the latest news items from Africa and Asia. I want the students to open the science section of the New York Times or pick up a copy of Scientific American and understand what they read, to know where to find additional information and to evaluate the truthfulness of material. I hope I have instilled in them an appreciation for lifelong learning.

What is your favorite interaction with your students?

My last group of mentees graduated in 2011, and my aim was to help them work their way through the curriculum for a solid academic foundation and to make sure they had the appropriate internships and opportunities to make them competitive for the work force or professional and graduate school. I also wanted to position them to do study abroad. Those students all had extremely interesting college careers
and, very importantly, they all finished on time. Today those students are in medical school, veterinary school, pharmacy school, and other graduate and professional programs.

What are your current projects?

After preparing for a course a few years ago on the 1918 Spanish Flu, I became interested in what happened in Sherman during that time. My students and I did some initial research during the class as to what might have happened. Later I did a more comprehensive study of newspaper archives and funeral home records to piece together a picture of Sherman in 1918—the key players who were struck down with the flu, what the medical care was like, etc. I have presented my research to my non-majors class as well as the Sherman community, the East Texas Historical Association, and the Texas Folklore Society.

What do you see yourself working on in the next few years?

I will teach one non-major course each term until I fully retire. I will continue work on Century of Science library exhibits with John Richardson of the chemistry faculty and Pat Means of the Abell Library staff. We open an exhibit in the fall that includes the 1940-1970 era. Even after I retire completely, I will continue research and writing on frontier naturalist and physician Gideon Lincecum, especially his medical practice in Mississippi and Texas.

And, the Telling Our Stories autobiographical project will go on as it has since 1990. Our very devoted writers wouldn’t allow us to stop. We will continue to publish books from that effort; we have done 11 so far. Our 12th anthology will be published in fall 2012. See more about Telling Our Stories.

Several of your projects seem to have a historical element.

Yes, I am aware that my research has become a mixture of science and history. The beginnings of this developed in the research I did in collaboration with Jerry Lincecum, emeritus professor of English (my husband), and the late Edward H. Phillips, emeritus professor of history, on the book Science on the Texas Frontier: Observations of Dr. Gideon Lincecum. The three of us worked as a team sharing our expertise and research approaches. We also co-edited Gideon Lincecum’s Sword: Civil War Letters from the Texas Home Front.

Your last book, the 11th in the Telling Our Stories series, is a bit different than earlier publications.

Yes, the book Collected and New Stories of Miss Ima and Mr. Bill tells the crazy antics and serious episodes of the past 10 years of our lives through the eyes and voices of our dogs. I was an observer and served as their scribe. Writing it tapped into a whimsical side of me.