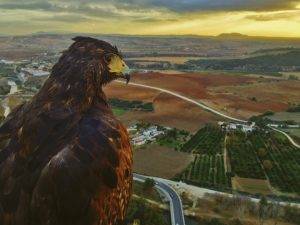 While studying abroad in Seville, Spain, in Fall Term 2013, Alejandrina Ocañas ’15 traveled four hours outside Seville to the small town of Arcos de la Frontera, which sits on a huge rock cliff. She, and another “visitor” shared an amazing view of the valley below. Alex said the area has evidence of Neolithic and early Roman settlement, but is mostly influenced by the Moors who took over around the year 1000.