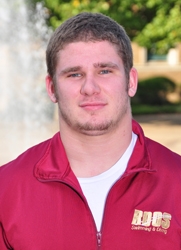 The Austin College community experienced a tragic loss February 23 in the death of freshman Chase Matthew Gaddy, 19, in a motorcycle accident in Sherman.

The son of Sharon Ashmore and Brian Gaddy, Chase was a 2010 graduate of Bishop Lynch High School, where he excelled in football, diving, shotput and discus, and powerlifting.

In addition to being a strong and committed student-athlete, Chase exhibited an incredible entrepreneurial drive and spirit. Beginning with mowing lawns in grade school, he grew his business into the highly successful Gaddy Landscaping with dozens of clients. In 2008, Chase was recognized with the TCU Texas Youth Entrepreneur of the Year Award.

Arriving at Austin College in fall 2010, Chase quickly made friends among his college classmates and continued his passion in athletics as a member of the Kangaroo swimming and diving team. He had an excellent regular season, and in the Southern Collegiate Athletic Conference Championship meet on February 16, Chase placed eighth in the 1-meter diving event, scoring 338.95 and placing higher at the event than any Austin College male diver since the ’Roos joined the conference.

Funeral mass was held February 28 at Saint Thomas Aquinas Catholic Church and a memorial service was held March 2 at Austin College. Donations may be made in Chase’s name to the scholarships funds of Austin College or Bishop Lynch High School.

Several of Chase’s friends and classmates spoke at the memorial service at Austin College, including fellow diver Chelsea Wylie ’13, who shared her comments.