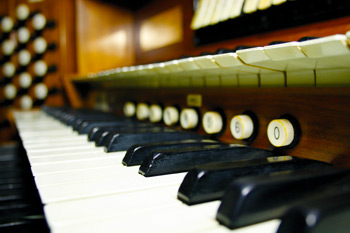 After Wynne Chapel was built at Austin College in 1958, the Toddie Lee Wynne family of Dallas, who provided funding for the chapel, decided it needed something more. After much deliberation as to the best possible choice, an Aeolian-Skinner grand pipe organ was installed in the chapel in 1963, also with gifts from the family.

Aeolian-Skinner has been recognized as one of the most important organ builders in the United States. It started as the Skinner Organ Company in 1901 and merged with the Aeolian Company in 1932. The company built several high-quality organs, including the Wynne Chapel addition, before ending business in 1972. When Mr. Wynne was considering organs, he wrote to Austin College President John D.Moseley: “The first question, as to the builder, to practically all organists is simply one answer—the Aeolian-Skinner. This is considered by most organists to be the finest built and best musical instrument.” 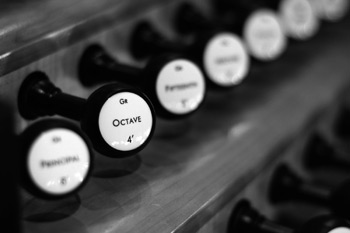 The late Richard Tappa, longtime music faculty member and College organist, came to Austin College partly because of the fine quality organ. Anna Laura Page, former first lady of Austin College and an accomplished organist, said, “Because of its historical nature, we need to strive to keep this wonderful instrument in good working order. It is a spectacular instrument with incredible acoustic qualities, and I am so proud to be able to play it on occasion.” Anna Laura recalled that a few years ago, a doctoral student doing his dissertation on Aeolian-Skinner organs viewed the Wynne Chapel organ and was very excited to find it still in place and so well cared for—a tribute to the careful attention of Dr. Tappa. 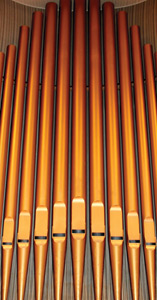 To produce the sounds made by a pipe organ, air must pass through the rows of pipes as keys are played.Water wheels and hand-pumped bellows are among the methods that helped blow air through the pipes before electricity, but ‘modern’ pipe organs are powered by a motor-driven fan. Air is pumped into the reservoir, which holds the air under constant pressure to produce a steady tone through the pipes.

Austin College’s organ has three keyboards or manuals and a pedalboard, which the organist plays to produce the range of notes and sounds in organ compositions.

Pipes are arranged by timbre and pitch into ranks—or rows. (The Austin College organ’s 32 ranks are housed in the organ case behind the stage.) The organist pulls stops to admit air to each rank—the origin of the phrase “to pull out all the stops.”