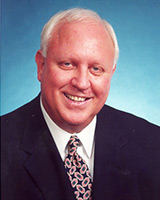 The Austin College community was saddened to receive word at press time of the death of football legend Donnie Duncan ’62, who died March 13 after a long battle with cancer. The news of his December 2015 National Football Foundation (NFF) Legacy Award already was included here.

The award, presented in New York City, honors extraordinary contributions to the NFF. “Duncan made an impact at every level, starting as a high school and college player before becoming a successful Texas high school football coach,” the NFF president announced. “He would go on to be a prominent assistant for two national titles at Oklahoma, the head coach at Iowa State, and an executive director of two bowl games. Duncan did an incredible job as Oklahoma’s athletic director, and he was absolutely key to the foundation of the Big 12 Conference. … We are proud to honor his dedication to the game with an NFF Legacy Award.”

Duncan was an outstanding athlete at Austin College, inducted into the Athletic Hall of Honor in 1971. He was named to the College’s Distinguished Alumni in 1998 and received the Coach Joe Spencer Award for Meritorious Service and Lifetime Achievement in Coaching in 2004. He has been a great friend and supporter of the Athletics program at Austin College.