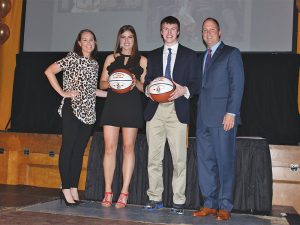 Austin College men’s and women’s basketball teams each welcomed new members to the 1,000-point club, with Brian Baehl ’17 reaching the milestone on the men’s side while Kendall Heitmeier ’17 achieved the mark for the women. Both players finished the season with All-Southern Collegiate Athletic Conference recognition. They are pictured at left with men’s coach Rodney Wecker, who completed his 10th season with the ’Roos this spring, and women’s coach Michelle Filander, who has had seven seasons with the program.

Next: Tennis Advances – Coach is Honored