The 2016 Legends celebration included the usual reminiscing and sharing of memories as Austin College alumni athletes gathered on campus for several events. One of the July 9 events became quite memorable when a “legendary” storm hit the city, with forceful winds that took down trees and knocked out power on campus for hours—all just before the annual awards dinner and silent auction were scheduled to begin. In true Austin College alumni fashion, the guests found alternate ways to celebrate. Some guests ended up at City Limits; others convened at the Hilton Garden Inn in Denison. By morning, the storm had cleared and the annual Slats Golf Tournament went on as planned. 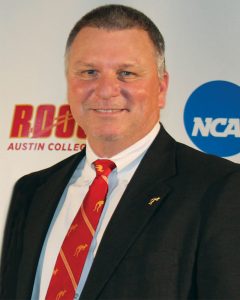 David Norman ’83 was a four-year football letterman and a member of the College’s 1981 NAIA national co-champion team. After earning a master’s degree in secondary education in the Austin Teacher Program, he began his career in the Denison Independent School District, where he spent five years working as head women’s track and field coach, assistant varsity football coach, and an elementary physical education teacher.

In 1989, David returned to his alma mater as an assistant professor in what is now the Department of Exercise & Sport Science. He also was named head baseball coach and an assistant football coach, serving as offensive coordinator under head coach Mel Tjeerdsma. In 1994, David was named head football coach and assistant athletic director at Austin College, working under Bob Mason and Tim Millerick. In 2006, David stepped down from coaching and devoted himself to work as associate athletic director. In 2010, he was named director of athletics and chair of the Department of Exercise & Sport Science, positions he continues to hold today. David stepped back into coaching briefly in 2013, leading the women’s cross country program in its first season. 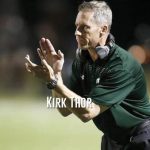 Kirk Thor ’91 had a very successful year as head football coach at Mansfield Lake Ridge, guiding his team to a 15-1 record and a first-ever spot in the Division I 5A championship game, a first for the school. The state runner-up title marked a remarkable turnaround as the team was 0-10 in Thor’s first season as coach in 2012. 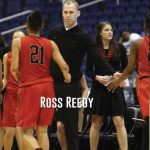 Ross Reedy ’05 achieved historic success as the girls basketball coach at Frisco Liberty High School. The team made the school’s first appearance in the Texas state tournament, reaching the championship game and finishing as the 5A runner-up, with an overall record of 33-7. Reedy was named the Texas Girls Coaches Association 5A-6A Coach of the Year.