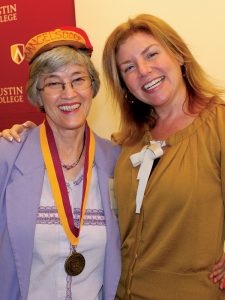 Members of the Austin College Class of 1962 officially became Golden ’Roos during Commencement weekend in May as they marked the 50th anniversary of their graduation. Reminiscences, hugs, and much laughter were the staples of the weekend. Several Golden ’Roos from earlier years also attended the annual festivities, including Jack Selman ’57, celebrating 55 years, and Ben Harmon and Mary Walker Kuhn ’52, celebrating 60 years since their own graduations.

Many stories of the group’s days on campus were told during the “Walk Down Memory Lane” session with Jerry Lincecum, professor emeritus of English, and Peggy Redshaw, professor of biology. The faculty members’ summary of the afternoon’s remembrances is available online.

Members of the 50-year class have began funding to endow the Class of 1962 Scholarship as a reunion gift to the College, but have yet to reach the full amount needed. To make gifts in support of the scholarship, contact Paula Jonse, executive director of alumni engagement, at 903.813.2389.