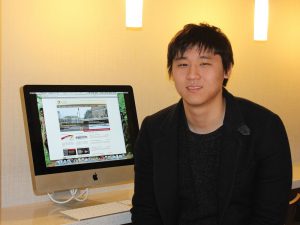 Min Shim ’17 of South Korea loves his college experience, feeling right at home among the good friends he has made at Austin College. He first came to the United States as an exchange student as a high school sophomore, living with a family in Utah.  He found the education challenging so arranged to remain in the country,  graduating from a private school in Utah.

Wanting  to attend college in the U.S., Min, along with his sister who attended the University of Michigan, began to research colleges. Learning about Austin College, Min liked the size of the student body, small classes, attention from faculty, and the emphasis on global education. Being awarded the GOLD Impact International Student Scholarship confirmed his college choice.

A business major, Min said he likely will return to South Korea to work in his father’s business in transportation after graduation. In the meantime, he is enjoying learning more about the lives of his classmates and telling them about his home in South Korea.

That important influence of international students within the Austin College community led students in the Class of 2008 to direct their senior gift toward establishment of a scholarship for an international student. Over the past year, Graduates Of the Last Decade (GOLD) alumni helped to complete funding and fully endow the scholarship, now known as the “GOLD Impact Scholarship.”

Min is interested in learning additional languages and possibly a study abroad experience while at Austin College. He enjoys Texas, though the winter months were a bit colder than he had hoped. He likes the sense of Texas state pride and confidence he sees around him. While in Utah, he particularly enjoyed the Texas Roadhouse restaurant and finds it very interesting to now visit a Texas Roadhouse in Texas. Amidst the many things he is learning at Austin College and in Texas, he finds cheese fries a good discovery. He looks forward this fall to attending the State Fair of Texas—“especially for the food.” Sounds like a native!