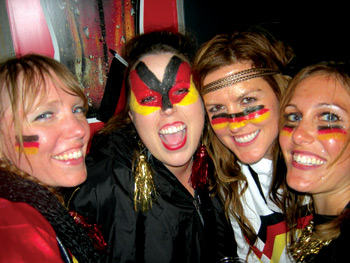 The idea of an international reunion seemed a perfect idea to Lori in Houston; Kari in Washington, D.C.; and Kelly in Dallas. Though not huge soccer fans, the World Cup’s global focus promised an awesome adventure. The journey was all they had hoped for—from beautiful scenery to experiences with people from around the world to safaris with up-close encounters. They sampled local wine, walked with penguins, and learned about apartheid.

Kari just completed a master’s degree in Spanish literature and is teaching Spanish in Washington, D.C. She has been accepted at three top-tier graduate schools for international relations and policy and is deciding where to attend this fall.

Kelly does public awareness marketing nationally and internationally for the American Heart Association, based at the national center in Dallas. Her work focuses on cardiac arrest and public access to defibrillation.

Lori managed the Spanish language curriculum for her district in Houston, but this summer she and her son will move to Guatemala City where she will be the assistant principal at Colegio Valle Verde in the fall.