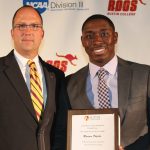 Only 18 players in the history of Austin College men’s basketball have reached the 1,000-point career-scoring mark. Ransom Okpala ’14 is the latest to make the list, reaching 1,000 points during a January game against Texas Lutheran University. A 5-foot-11 guard, he completed majors in business administration and economics. Ransom received second team All-SCAC recognition after finishing the season sixth in the conference with a scoring average of 16 points per game while shooting 44.6 percent from the field and 39.9 percent from 3-point range. He also averaged 4.8 rebounds, 1.8 assists, and 1.7 steals per game. 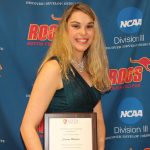 A First for Swimmers

Lauren Wheeler ’16 became the first Austin College swimmer to earn multiple All-Southern Collegiate Athletic Conference honors by placing second in both the 100- and 200-yard backstroke events. She just missed becoming the first ’Roo swimmer to win an individual championship at the SCAC Championship Meet—edged by just .27 seconds in the 100 backstroke, finishing with a time of 58.89 to establish a new Austin College record. Lauren also took second in the 200 backstroke with a time of 2:08.83 and set a new Austin College record in the 100 freestyle while swimming the lead in the 400 free relay. Lauren swam her leg in a time of 54.41. 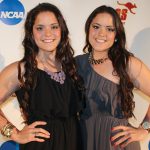 Sophia Hernandez ’16 threw the first perfect game in Austin College softball history March 11, striking out 14 of 15 batters faced in the ’Roos sweep of Rust College of Mississippi. She struck out the first 12 batters on her way to a program record 14 on the day, and the other out came via a soft grounder to first base. She needed only 61 pitches to get the perfect game. The ’Roos won, 15-0. Coincidentally, her twin sister Briana Hernandez ’16 was the catcher for the game. 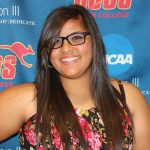 In the second game of that doubleheader, Victoria “Tori” Herrera ’17 had the second highest single game strikeout total with 13, allowing just three hits in the shutout victory. A few weeks later, she tossed back-to-back complete game shutouts and broke the ’Roo single season strikeout record, finishing the season with 115 and leading the SCAC—as a freshman. The ’Roos also set a new program single season win total in NCAA competition with 18 victories.